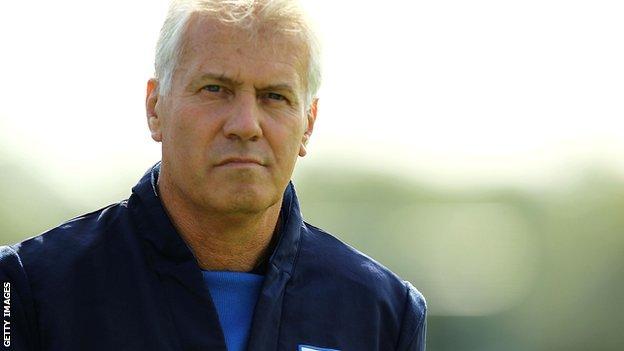 Hope Powell was sacked this week after 15 years as senior head coach, and Hills - also the under-23 boss - will stand in for games against Belarus on 21 September and Turkey five days later as England aim to reach Canada in 2015.

The Football Association has advertised the vacancy created by Powell's exit.

The FA has also advertised for a new role of head of elite women's development, who would work with director of elite development Dan Ashworth.

Powell left after a poor European Championship in Sweden, where England were the worst-performing side in the tournament. They finished bottom of their group with just one point after losing to Spain and France and drawing with Russia.

The team will now turn their attentions to the 2015 World Cup in Canada, where they will be aiming to qualify for their third consecutive finals.

England's qualifiers against Belarus at Bournemouth's Goldsands Stadium and with Turkey at Portsmouth's Fratton Park will both be live on the BBC.

Herdman, who was born in the North East of England and also coached New Zealand at the 2011 World Cup in Germany, won a bronze medal with Canada at the 2012 Olympics.

He said he would have to balance the pull of the England job with staying in charge of the hosts of the next World Cup.

"If the English FA rings me up, it's my homeland, and if they say 'we need your help' I'm going to consider that," Herdman told BBC Sport.

"But at the end of the day, I have a big job here in Canada with some exciting players."

Ashworth has indicated the post would not need to be filled by a woman, or a coach from the women's game.