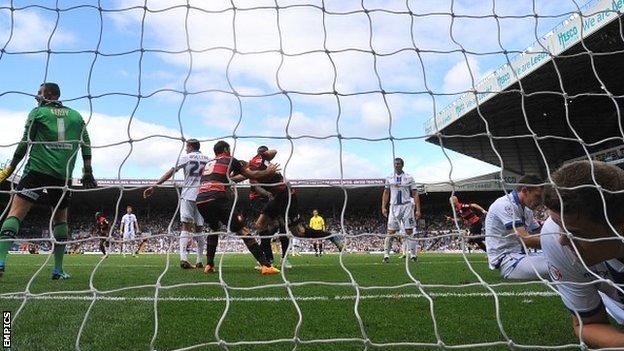 Queens Park Rangers' excellent start to life back in the Championship continued with a scrappy win at Leeds.

Barton had an early finish ruled out for offside, despite television replays appearing to show him level.

Rodolph Austin nearly rescued a point for previously unbeaten Leeds in injury time, but his dipping shot hit the bar.

Having been relegated from the Premier League last season, QPR's victory underlined their prospects of an immediate return, with Harry Redknapp's side - who have now won four of their five league games - combining the necessary steel and invention to come through a tricky encounter.

Their second away victory of the season means they have matched the total they achieved in the whole of last term.

Leeds substitute Dominic Poleon had two decent efforts saved and made a difference after coming on with Matt Smith just before the hour mark, but it was the visitors who had the better chances throughout.

In front of a resolute defence, in which Hill played at left-back, Shaun Wright-Phillips showed flashes of creativity.

And after Barton's disallowed effort, Charlie Austin then threatened on several occasions, his best effort seeing Paddy Kenny deny him from a tight angle following a poor backpass by Leeds defender Stephen Warnock.

Hill's goal came 15 minutes from the end when Kenny failed to hold Barton's free-kick and Austin flicked it to the unmarked defender.

Junior Hoilett tested Leeds' backline further when he was introduced in the second half but the hosts came closest to equalising when Austin's effort clipped the bar in stoppage time.

"I am really pleased with the result in a very tight game.

"We didn't get the ball down and play as much as we can, so it was really pleasing to remain unbeaten in the league, keep a clean sheet and get a win at a really difficult place against a team who I think will be there or thereabouts at the end of the season.

"At the time we couldn't see whether Joey was onside when his goal was disallowed but after watching it again he wasn't offside. It was a difficult one for the officials but in the end it didn't cost us."

"We got done at a set-play which is disappointing to say the least and we didn't do enough with the ball. Without possession we were diligent and solid. No-one could fault the players' effort.

"They kept going and showed real desire against a team that has cost a lot of money and the crowd didn't get on our backs."