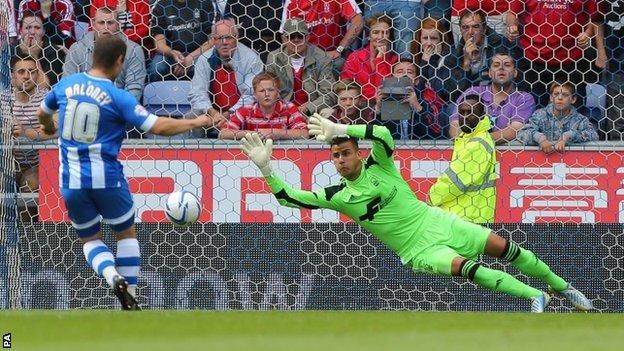 Wigan recorded their second win of the season with a hard-fought victory over previously-unbeaten Nottingham Forest.

Forest took the lead inside the first 10 minutes when Andy Reid curled in a free-kick past the reach of goalkeeper Scott Carson.

The Latics equalised when Shaun Maloney converted from the spot after Jack Hobbs had fouled Marc-Antoine Fortune.

Wigan's second came on the half-hour mark when Fortune's ball came off the bar and Jordi Gomez tucked in.

Despite great pressure from the visitors after the break, Owen Coyle's side held on for their first league win over Forest.

Reid's early strike came against the run of play, although Wigan reasserted their authority soon after and were rewarded when former-Celtic winger Maloney scored with a penalty after Fortune had been brought down by Hobbs.

Maloney came close to adding a second when Jean Beausejour's intended shot flew inches past the Scot who was waiting to pounce.

They did finally breach the final line of defence again when Gomez was on hand to sweep in after Fortune's cross had bounced off the woodwork and into his path.

Centre-back Thomas Rogne almost scored a third for the home side when he got his head to the ball from a corner but directed his effort narrowly wide.

Forest piled on the pressure after the break with Reid heading over from Eric Lichaj's cross before Jamie Mackie had a better chance with a header that cleared the Latics bar by an inch.

"We had to show everything today - all four seasons in one game - and we did that.

"This group is in its infancy, but I was delighted with everything we offered in terms of quality and desire.

"There are going to be games like this all season in the Championship, and it was pleasing to come through it."

"We weren't ourselves in the first half and we deserved to be behind.

"We did better in the second half and I thought we deserved something in the end.

"We were much more like ourselves in the second half, but we needed a break and we never got it.

"I'm delighted with where we are so far and the position we find ourselves in going into the international break.

"We'll look forward to a bit of a break now, because it's a long season ahead."