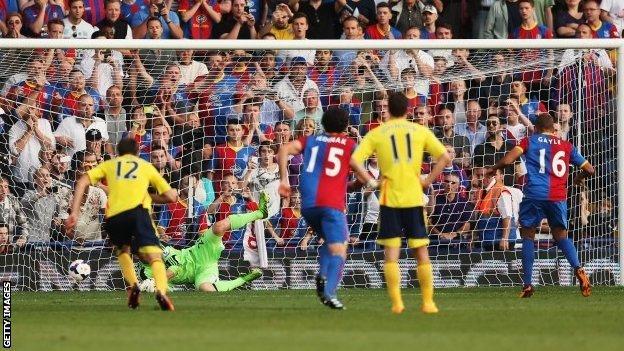 Danny Gabbidon gave Palace an early lead from close range, before Steven Fletcher levelled for the visitors with a header after the break.

Dwight Gayle made it 2-1 from the spot after he had been brought down by John O'Shea, who was shown a straight red.

Stuart O'Keefe sealed victory with a great strike from the edge of the area.

It was a deserved three points for Palace, whose manager Ian Holloway had earlier expressed concern that the squad had yet to gel as a unit after two league defeats.

They looked a strong and potent collective against Sunderland, however, and gave the visitors a high-intensity workout with their lightening quick counter-attacks.

Palace's ninth-minute opener, though, came from a set-piece.

The hosts won a corner on the left and promising Spanish defender Jose Campana, signed from Sevilla in the summer, swung the ball into the box. After a bout of pin-ball, defender Gabbidon got the decisive touch.

Palace looked to build on the good start and from two fast breaks Jason Puncheon twice went close with low shots that crept past the upright.

The 26-year-old Scotland striker had been burdened with the responsibility of changing his side's fortunes and midway through the half he did just that when he powered in Jack Colback's brilliant cross from the left.

Sunderland would have been expected to build on that, but Palace did not allow them to as they reverted back to earlier type and continued to punish their opponents on the counter.

Eleven minutes from time O'Shea lost control of the ball and Gayle raced onto the ball before he was clipped by the defender inside the area. After a few seconds of deliberating, referee Lee Probert awarded the penalty and showed the defender red. Record-signing Gayle grabbed the ball and smashed his effort into the bottom corner.

Kagisho Dikgacoi almost scored a wonder-goal soon after but saw his shot acrobatically tipped over by Keiren Westwood. However, there was icing on the Palace cake in stoppage time when 22-year-old substitute O'Keefe curled in a delightful third.

"All you can do is work on your performances. They scored and we didn't wobble - we had a little spell when they put Fletcher on but that was a commanding performance. I was so pleased, it is not relieved.

"I was very, very pleased with the determination, the work rate and the performance, some of that passing was nice to watch."