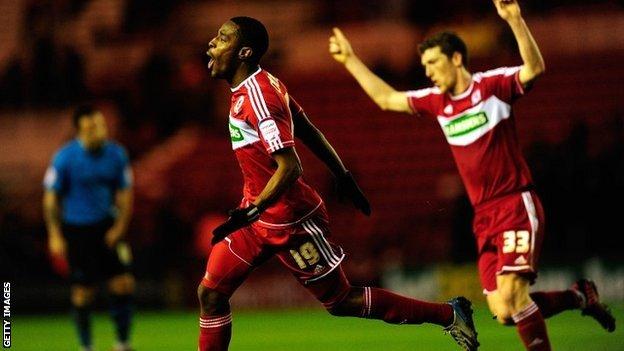 Middlesbrough came from behind to salvage a draw with Sheffield Wednesday but they are still waiting for a first Championship home win this season.

Boro dominated for long spells but fell behind when Michail Antonio stabbed home from a corner.

The home side levelled quickly after the break through Mustapha Carayol but despite creating plenty of chances they could not force a winner.

Lukas Jutkiewicz came closest when he hit a stinging shot against the bar.

Dave Jones's side have now squandered nine points from winning positions this season and despite their third consecutive draw are yet to register a victory this term.

Boro, who have one win this season, created chances from the start with Jutkiewicz cracking a low 20-yard drive just wide early on and George Friend firing over after a neat one-two.

But Wednesday scored the opener on 34 minutes when a corner was nodded down into a crowd for Antonio to hook home from six yards out.

Tony Mowbray's men were back on the attack as Friend squared for Leadbitter to drill in a low shot that brought a good save.

Boro levelled quickly after the break. Jutkiewicz got into the box and squared through a static defence for Carayol to stab home from six yards on 49 minutes.

And it was the hosts who finished stronger as Jutkiewcz broke into the box after a Leadbitter ball to hammer against the crossbar before Andy Halliday spurned a header at the back post.

"Wednesday came with a game plan to go on the counter-attack. There were times they pressed forward and that gave us space to play.

"It was different from Blackpool (in Boro's previous home game) who banked up and got everyone behind the ball. Wednesday gave us a bit of room to play, but we were far from dynamic.

"We need to learn how to break teams down and finish them off.

"We had a lot of great chances, but need to start taking them."

"I thought we shaded the first half and they shaded the second, but we had two great chances near the end.

"We had a right go at each other at times and we were two quick sides who tried to play it the right way.

"I can't fault my players. They looked bright and sharp and could have won it.

"But Middlesbrough scored when we had a spell where we gave the ball away too cheaply. We might have got away with it two years ago in League One but you don't get away with it at this level."