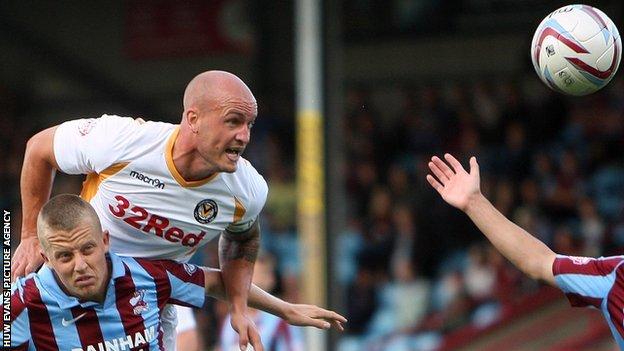 Andrew Hughes scored his first goal in three years to earn Newport County a point at Scunthorpe in League Two.

The visitors fell behind when striker Sam Winnall headed in from close range, his second goal in two games.

Justin Edinburgh's side went close to levelling early in the second half when Lee Minshull's header was tipped away by Iron keeper Sam Slocombe.

Newport deservedly levelled when defender Hughes hammered the ball home from a corner.

"The pleasing thing for me is the first half. I thought we were very, very good, in fact deservedly 1-0 up and yes it was early in the game.

"However I thought we mastered how we wanted to approach the game against a very strong side that we've seen here today and at times very brutal side.

"Had we got a second I thought we would have gone on to win it. However, the good positive side is that we didn't cave in, we stayed firm and stayed strong.

"We've had to fight a hell of a lot with the balls that were coming in."

Newport manager Justin Edinburgh told BBC Radio Wales: "After a slow and poor start we've got ourselves back in the game. But I think probably on reflection a point's a fair result.

"It's very unlike us to start the game slowly and if we could have kept them quiet for 20-25 minutes and worked our way around the game and the crowd might have turned a little bit.

"And certainly the game plan went out the window after about three minutes, which was really disappointing and unlike us.

"But what is like us is the endeavour and work-rate and effort we showed in the second half."