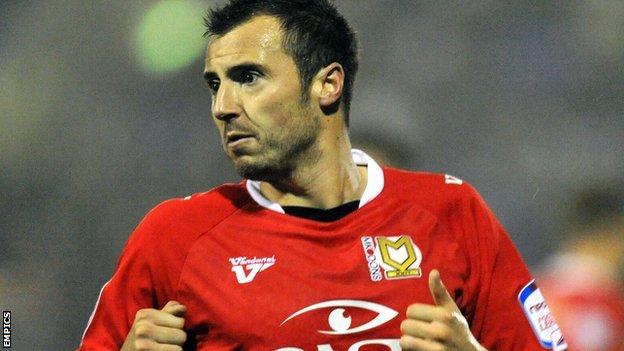 Brandy shot wide from five yards and his day got even worse when he was sent off for a late tackle on Lee Hodson.

The hosts had the better chances before then with Jose Baxter, Lyle Taylor and Tony McMahon all going close.

But Kay's late header made them pay for the their profligacy and takes the visitors up to sixth place in the League One table.

"It was a real hard one to take, I think we had done enough in the game to win it.

"We had three really good chances. If we could have taken any of them we would have been in a good position.

"Ultimately we got a real kick in the teeth at the end...and that is very disappointing.

"There are a lot of positives from the game and the way we played, but ultimately we're judged on results and that's why we're disappointed."

"I thought a draw would have been more fair, a bit of a snatch and grab towards the end to win it the way we did.

"I think our fixtures were as difficult as it gets, so a tremendous testament to our players that they've actually gone and performed the way they have.

"These players are special players. They care for the football club; they put a shirt on, it means the world to them.

"To be honest, we did look tired. We didn't come here fresh; they've had a whole week to prepare for this, we've only had an hour on Thursday and an hour yesterday (Friday). So our opportunity to perform has been difficult."