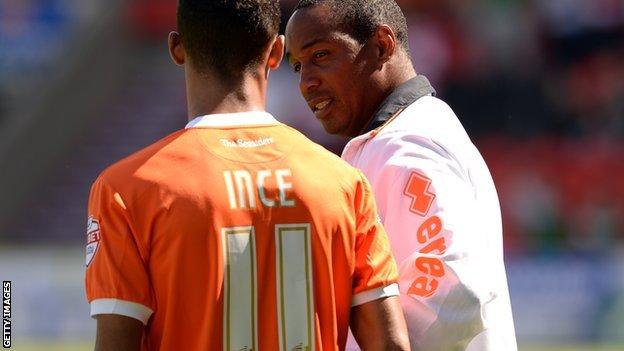 Tom Ince's late goal maintained Blackpool's unbeaten run and sent them top of the Championship, consigning Watford to a first loss of the season.

The Hornets were awarded a penalty early on, but Troy Deeney's spot-kick was saved by the impressive Matt Gilks.

And they hit the post twice through Marco Faraoni and Diego Fabbrini.

Blackpool were the better side in the second period, with Nathan Delfouneso having an effort ruled out for offside before Ince's effort sealed the points.

The winger collected the ball in the final third and ran at the defence before drilling a shot into the corner of the net.

Four wins and a draw makes this Blackpool's best start to a league season since 1935.

But the unbeaten visitors were on top throughout the first half, denied by Gilks.

And when Neal Bishop brought down Almen Abdi in the box, the Seasiders' keeper excelled to deny Deeney from the spot.

The Scotland goalkeeper was soon in action again, rushing out to deny defender Gabriele Angella.

When they did get past Gilks, the visitors were denied by the woodwork - Faraoni hitting the post from Ikechi Anya's cross and Fabbrini also striking the upright.

Despite Watford's pressure, the score remained goalless at half-time, and it was Paul Ince's Blackpool side who came out brighter in the second period as Isaiah Osbourne flashed a header narrowly wide.

Delfouneso did have the ball in the net but was ruled offside, and substitute Ince sent an effort just off target.

Former Arsenal goalkeeper Manuel Almunia then tipped over Barry Ferguson's in-swinging free-kick to keep Blackpool at bay, but Ince's superb strike nine minutes from time won it for the home side.

"We rode our luck and sometimes you earn your luck. When you have central midfielders, one at right-back and the other at centre-half, you're going to ride your luck.

"Gilks made a fantastic save from a penalty. I couldn't wait to talk to them at half-time. We showed them too much respect."

"I cannot believe we lost the game. Actually I can, it happened last season a few times. We had complete domination and then we got sloppy in the second half.

"It was like Millwall away last year, but even more so. This is the Championship, that's why people say it's such a difficult Championship.

"It was a superb goal from a superb player, I don't have any complaints. They scored a great goal and I was the first one to clap."