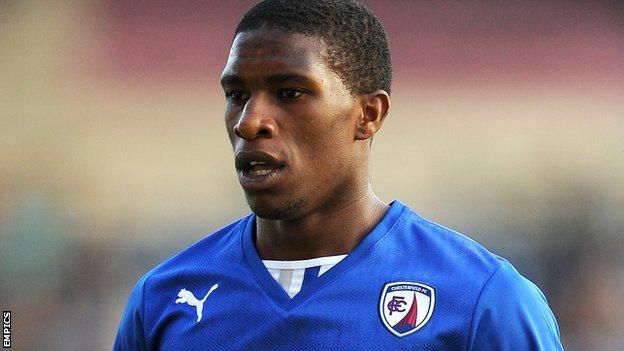 Pompey were reduced to 10 men when skipper David Connolly was given a straight red card for an off-the-ball incident with Sam Hird.

Gnanduillet headed home Eoin Doyle's cross from the right for 1-0.

Darikwa then produced a super strike across Pompey keeper John Sullivan in stoppage time to seal the victory.

"The players have given absolutely everything. I couldn't ask any more of them whatsoever.

"They've battled and they've fought and they've even got chances that second half; playing against a very good Chesterfield side who will be up there or thereabouts I think they've given everything they can for us.

"I thought we got a goal when Sonny Bradley went through; how we haven't scored I don't know, from that. Of course you're disappointed, there were two penalties we should have had. Where he's taken out David Connolly, their manager's saying it's a stonewall penalty."

On Connolly penalty shout and subsequent red card: "David's frustrated, I didn't see what happened. David's apologised, he says it was out of order for him to do it, but he was still wound up by the decisions from earlier."

"The game swung on a couple of big decisions, the penalty (shout) for Portsmouth in the first half.

"It looked a penalty... and then David Connolly's got involved and suddenly he's been sent off.

"Second half, we never played well. We never moved the ball quickly enough, the pitch is very dry and we were making bad decisions.