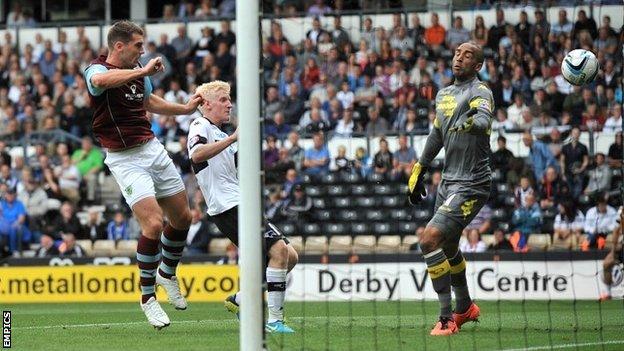 Burnley celebrated another memorable away day at Pride Park with a resounding and thoroughly deserved 3-0 victory over Derby County.

Danny Ings opened the scoring by muscling his way past Jake Buxton to steer in a low shot after 14 minutes.

Sam Vokes bundled in from six yards when the ball was headed across his own area by Derby full-back Kieron Freeman.

The victory means Burnley extend an unbeaten run against Derby that stretches back to January 2007 and now includes four wins at Pride Park.

It also lifts them into third in the Championship table after Nottingham Forest and Leicester both lost.

Boss Sean Dyche's side could have gone ahead earlier than they did when Michael Duff headed narrowly wide from a free-kick.

Ings made the breakthrough soon after, however, as Keith Treacy hooked the ball forward and the striker fired across former Burnley keeper Lee Grant from 10 yards.

Derby were struggling to find any fluency and boss Nigel Clough would have been dismayed by Burnley's second.

A long ball to the back post from Kieran Trippier was headed into danger by Freeman and although Will Hughes tried to clear, Vokes made no mistake.

Russell almost got Derby back into the game but he shot wide from eight yards and then squandered a crucial chance from the spot when Shackell was ruled to have tripped Chris Martin.

Heaton made a superb save, throwing up his left hand to block Russell's spot-kick.

Vokes twice went close soon after, before Shackell made amends for conceding a penalty with the final goal 16 minutes from the end.

"Very disappointed with the defending in the first half. We have been good going forward and good defensively but today we were poor in both areas.

"It was down to individual errors and we brought Kieron (Freeman) off at half-time, we thought both goals came from his area and he should have done better, but it's about the team and we never seemed to get going.

"You have to give Burnley credit and it was never going to be comfortable but if you give goals away you don't give yourself a chance."

"It was a very good performance. The link all managers are looking for is when the physicality meets tactical organisation meets with individual and team quality and I thought we found that for a lot of the game.

"Danny (Ings) is really alive at the moment and he's enjoying it. We spoke a lot to him last year and during the summer about what we think he can achieve and he's taken a lot on board.

"I must say that he's getting the plaudits and rightly so but I will put Sam Vokes into the mix, I thought today he was absolutely tremendous and for the last 25 minutes was unplayable. He's developing well and I think he's enjoying his football."