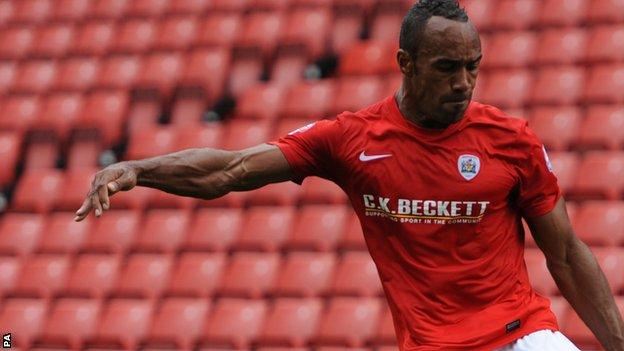 Barnsley earned their first win of the season with two first-half goals against Huddersfield at Oakwell.

Chris O'Grady opened the scoring on eight minutes, while on-loan striker Marcus Pedersen added the second just after the half-hour.

James Vaughan pulled a goal back for the visitors after 61 minutes.

The hosts held on for a much-needed victory following two heavy defeats in the Championship and the Capital One Cup in the past week.

A 5-2 loss at Blackburn last Saturday was followed by a 5-1 thrashing by Southampton at home on Tuesday, but David Flitcroft's side looked to have shaken off those performances from the outset.

O'Grady had already had one half-chance blocked by the time he latched on to a loose ball in the area to drive the ball home with his left foot.

The 27-year-old shot over the bar before Pedersen, on loan from Dutch side Vitesse Arnhem, beat Huddersfield goalkeeper Alex Smithies with a shot on the turn.

Terriers midfielder Adam Clayton went close early in the second half, then set up Vaughan with a deft pass that the striker drilled past Mike Pollitt in Barnsley's goal.

Vaughan later volleyed straight at Pollitt, on loan from Wigan, while Jean-Yves Mvoto was denied by desperate Huddersfield defending in stoppage time with Smithies still upfield following a corner.

"It's really pleasing to get three points on the board after going toe to toe with an in-form Huddersfield team and putting in a good performance.

"We've been knocked and not won games we possibly should have won so I'm pleased that we've come out on top today. All the players deserve credit.

"There are no qualms about the result. In the first half we were overran but in the second half we were better. Barnsley were committed and scored a couple of goals before we got out of the blocks.

"At half-time we had a conversation and things changed a little bit for us. We looked more likely to score in the second half.

"There's no substitute for working hard and trying to close people down and they did that better than us. That can't happen again."