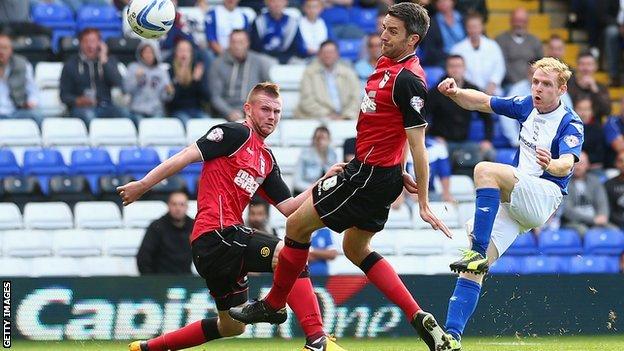 Chris Burke's equaliser secured Birmingham City's first home point of the season as his side came back from behind to draw with Ipswich Town.

Christophe Berra put the visitors ahead in the first half with a close-range stooping header for his first goal since a summer move from Wolves.

But Burke levelled in the 76th minute with a deflected left-footed effort.

It was Birmingham's first goal of the season at St Andrew's after successive 1-0 home defeats against Watford and Brighton.

Ipswich, coming off the back of successive Championship defeats, saw McGoldrick narrowly head wide early on when he connected with Aaron Cresswell's left-wing cross.

Cresswell was involved in Town's goal, his delivery finding Berra and the Scottish defender heading into the net through a crowded six-yard area.

McGoldrick then wasted two headers, before being denied by the excellent Randolph, who kept out his shot from outside the penalty area.

"At least in the second half the players were true to themselves as individuals.

"We did not create any chances in the first half but we had a go in the second half and had a bit of luck with a deflection to give us the equaliser."

"It was no coincidence that Chris Burke obtained the second half equaliser. He works every single day to perfect scoring such goals."

"We came up against a goalkeeper in Randolph who is in outstanding form and they had the get-out-of-jail freak goal.

"I hope we have get a slice of luck like that at some stage in the season.

"Honestly, it feels as if we have been beaten."