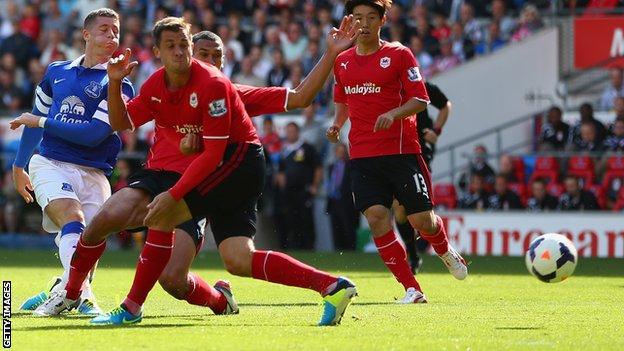 Everton had to settle for a point in a hard-fought game against Cardiff, as Roberto Martinez's wait for a first league win as Toffees boss continued.

The visitors wanted a penalty when Gary Medel brought down Leighton Baines but referee Phil Dowd waved play on.

The Bluebirds created little apart from an inswinging Peter Whittingham corner that Tim Howard had to scramble away.

Craig Bellamy also had a sight of goal for the Welsh side in the second half but took a heavy touch as he went around Howard and he failed to get a shot away.

Martinez is still unbeaten in the Premier League since taking over at Goodison Park in the summer, but he is unlikely to be satisfied after seeing his side leave Wales with a third-successive draw of the new campaign.

Baines, who along with his Everton team-mate Marouane Fellaini, has been linked with a move to Manchester United, looked to have been brought down in the penalty box by Medel's sliding tackle towards the end of the first half.

Everton will be disappointed they failed to take advantage of the possession they had, but Cardiff are already looking like a side who will be tough to beat at home.

The Bluebirds have now lost only one of their last 14 league games at home and this was a much calmer and less frenetic performance than when they shocked Manchester City 3-2 last Sunday.

The Welsh side are still without £7.5m summer signing Andreas Cornelius, who injured his ankle in the 2-0 Capital One Cup win over Accrington, and they lacked a focal point in attack despite Fraizer Campbell's willingness to run all day for the cause.

While Everton enjoyed the best of the opening exchanges, it was Cardiff who had the first real chance of the game when an in-swinging corner by midfielder Whittingham nearly caught out goalkeeper Howard napping at the near post.

The visitors survived that scare and went on to dominate proceedings against the home side with some impressive possession football, but they failed to create many real attacking opportunities.

After the Toffees' penalty shout was waved away, they then saw their best chance of the first half when striker Nikica Jelavic's header from point-blank range was stopped by Cardiff keeper David Marshall.

The home side did make more of a contest of it in the second half but Bellamy failed to control a defence-splitting pass by Korean Kim Bo-Kyung and the Welsh international's heavy touch saw him drift away from goal.