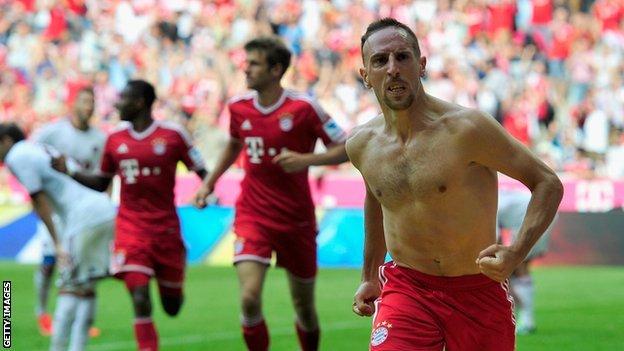 Bayern Munich and Bayer Leverkusen won to go level on points with leaders Borussia Dortmund in the Bundesliga.

Leverkusen went 2-0 ahead at home to Borussia Monchengladbach after goals by Stefan Kiessling and Sidney Sam.

Martin Stranzl and Juan Arango levelled the scores before Sam and Gonzalo Castro earned the hosts a 4-2 victory.

Mainz also have three wins from three games after a 2-0 home win against Wolfsburg, with Eric Maxim Choupo-Moting and Nicolai Muller the scorers.

Schalke's poor start to the campaign continued with a 2-1 defeat at Hannover.

The hosts led 2-0 at the interval following a penalty by Szabolcs Huszti and an effort from former Manchester United forward Mame Biram Diouf.

Adam Szalai pulled a goal back but Schalke have just one point from a possible nine.

In the day's other game, Freiburg twice came from behind to take the lead at Hoffenheim before settling for a 3-3 draw.

Sebastian Freis thought he had won it for the visitors but Tobias Strobl earned Hoffenheim a point with a late equaliser.