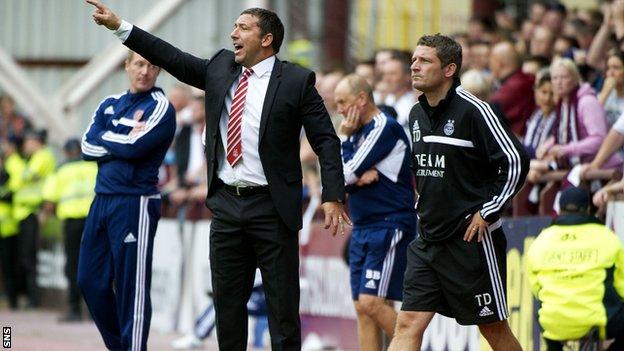 The Dons lost 2-1 to 10-man Hearts at Tynecastle after teenager Jordan McGhee headed a late winner.

"There's a lot of positives we can take from our performances this season, but this is a game we should've won."

Aberdeen do not have the best of records at Tynecastle but that, at one stage, looked like it was about to change, with striker Scott Vernon having three good scoring opportunities.

Jamie Walker shot the hosts into a first-half lead but Niall McGinn equalised from the penalty spot after Calvin Zola was fouled by Hearts defender Kevin McHattie, who was sent off as a result.

And despite further chances, it was McGhee who made sure the hosts got all the points.

"From a match where we had so much activity in the final third, we should be scoring more than the one goal we did," McInnes said.

"When Hearts went down to 10 men and we equalised to make it 1-1, you think your biggest enemy is the clock. We never at any time expected to go and lose the game.

"Hearts were really galvanised by a passionate crowd here but we should've been better than what we were to get the job done."

McInnes seems content that he's got the squad at his disposal to fulfil his aims.

"We've recruited well and we've got to believe we've got the answers in the dressing room - and I believe we have," he said.

"I haven't actively been speaking to too many agents or whatever.

"You're always keeping your ear to the ground but I'm happy with the squad we've put together here.

"We've got the club to a stage where the support believe in the team. We've got to make sure we're winning games of football."