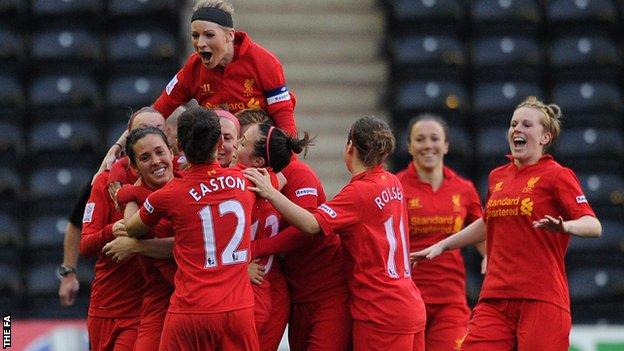 Striker Dowie took her season's goal tally to 14 as the Reds put distance between themselves and Arsenal.

Donny had Victoria Williams sent off after just six minutes as they slumped to a sixth defeat in eight games.

The Belles, beaten 6-0 by Arsenal last weekend, remain stranded at the bottom of the table.

Liverpool were already a goal ahead when Doncaster were reduced to 10 players, defender Bonner having fired them in front 60 seconds earlier.

Williams was dismissed for a trip on winger Rolser in the penalty area, midfielder Fors netting the subsequent spot-kick.

Dowie grabbed her first goal of the evening with a close-range finish from winger Amanda da Costa's 21st-minute pass.

And the striker, who joined from Merseyside rivals Everton in November 2012, added a second from a 24th-minute penalty after Da Costa was fouled by defender Millie Bright.

Midfielder Fara Williams helped herself to two goals in three minutes to put her team six in front and Dowie completed her hat-trick four minutes before the break.

Liverpool eased the pace in the second half but nevertheless added further goals, Rolser netting on 75 minutes and substitute Longhurst in the final minute.

Victory boosted the Reds' goal difference, as well their points total, as they continue to battle Arsenal, who have two games in hand, for the title.