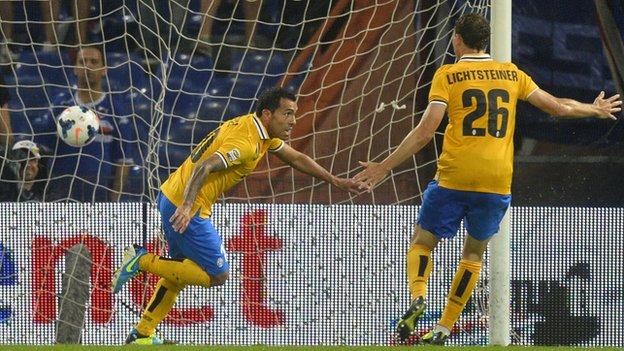 Sampdoria, who failed to create any chances of note, had substitute Paolo Castellini sent off late on for a foul on Stephan Lichtsteiner.

He scored as Juventus won the Italian Super Cup with a 4-0 rout of Lazio last weekend, and he picked up from where he left off as Antonio Conte's side got their league season under way in Genoa.

Tevez first threatened midway through the first half, when he saw a powerful shot kept out by Angelo Da Costa.

The Argentina international was not to be denied in the second half, though, as Arturo Vidal fed a pass to Pogba inside the area. The Frenchman crossed for Tevez to score from close range.

Sampdoria enjoyed a decent spell of possession in the closing stages but their hopes of snatching an equaliser were dealt a blow when Castellini was shown a straight red card for a strong challenge on Lichtsteiner.

It was the perfect start to the season for Juventus, especially as potential title rivals AC Milan suffered a surprise defeat earlier in the day.

Toni, 36, scored a header in each half as newly promoted Hellas Verona claimed victory in their first Serie A match for 11 years.

Midfielder Andrea Poli put Milan ahead on 14 minutes when he latched onto a pass from Mario Balotelli to score.

But Verona, tipped as relegation candidates, responded with former Italy international Toni's brace taking his Serie A goal tally to 110.