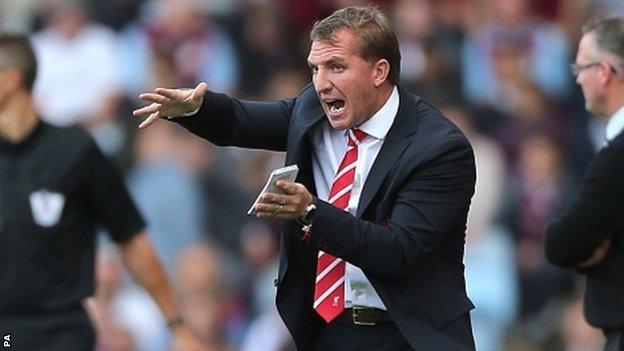 Brendan Rodgers says Liverpool's winning mentality can help his young side build on their best start to a Premier League season for five years.

The Liverpool manager saw his team maintain their 100% start with victory at Aston Villa on Saturday.

Daniel Sturridge scored the winner for the second Saturday in a row to leave Liverpool second in the league table.

"The mentality of the group is to win together. That is important," Rodgers said. "We have to keep it going."

Liverpool had to wait until 29 September to win their first league match of last season and the Anfield club had not won their opening two matches of the season since 2008-09, when they last challenged for the title. "It's still very early. What was important was to make a good start," Rodgers added.

"We didn't have a good start at all last year. Since the turn of the year we've been getting better and better."

Liverpool dominated the first half of the match, scoring through Sturridge, but Villa came back into the contest after the interval and might have pinched a point.

"It was a terrific win for us," Rodgers added. "The first half we had good control of the game and scored an excellent goal and in the second half we just needed to defend a bit more deeply. If we open up too much they can really hurt you. Our aim was to just to keep our lines tight together and deny them many chances.

"It was a good win for us as this is a difficult team to play against. We looked calm on the ball in the first half, some of our momentum was very good, our positioning was good, our mentality was good."

Once again Liverpool owed much to their goalkeeper Simon Mignolet, who made two vital saves from Christian Benteke. "In the second half you expect more pressure from them but overall Simon has made a couple of terrific saves and we got three points," Rodgers said.

Kolo Toure was once again important for Liverpool as he shackled Benteke for much of the game and Rodgers said he had gone a long way to help fill the void left by the retiring Jamie Carragher. "Kolo has been brilliant," Rodgers said. "With Jamie Carragher retiring and it was very important to get someone in of a similar ilk.

"We need that experience. He's 32, he's fit and he's got that winning mentality and he's been very influential in the changing room."