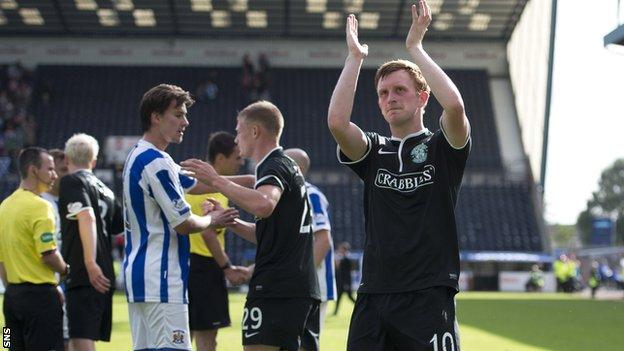 Hibernian manager Pat Fenlon is adamant he can get the best out of Liam Craig in a wide-midfield position.

"People have been saying he can't play in that position and that we're not using him properly," Fenlon said.

"But I think it's just been a case of asking him to do too much. We've now got him into a good area where he is really threatening coming in at the back post."

It is a first Premiership win of the season for Hibs, whose chairman Rod Petrie had publicly backed Fenlon earlier in the week.

And the Irishman denied he has anything to worry about following meetings with Petrie.

"People make too much of things like that," Fenlon told BBC Radio Scotland.

"Me and the chairman speak every week but it's about what's going on at the football club, whether it's the first team or the academy.

"No matter what the results are, that happens every week."

Fenlon is now keen to kick on from the victory at Kilmarnock and make it a turning point for their season after a disappointing exit from European competition and an Edinburgh derby loss to Hearts.

"We've come away from home and you win and it's fantastic," he said.

"Your next game at home is the one where you need to make that count and try and pick up three points."