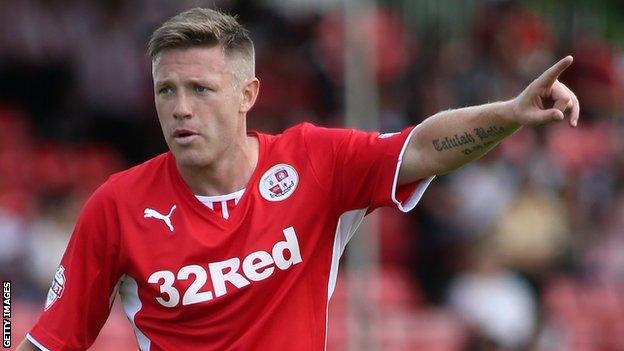 Gary Alexander scored twice for Crawley to inflict a first defeat of the season on Peterborough United.

Billy Clarke forced a save from Posh keeper Bobby Olejnik before Alexander volleyed in for the visitors.

Crawley had Michael Jones sent off late on for a second booking but were rarely troubled by Peterborough.

Their second win of the campaign puts them up to 10th, while the hosts, who had scored 23 times in their six previous games, drop to third.

"We didn't play with the energy and tempo that I wanted to. They scored, it was poor defending from us, but it was a good finish which gives them something to hang onto and changes the course of the game and like I said, we weren't up to our standards.

"I was disappointed with the two goals we lost, it was poor marking and poor defending. Slightly disappointing that at 1-0 we didn't have enough about us to change the course of the game.

"I can confirm that Celtic have made a bid on the day of a game, three times. In fact they made one bid during the game. It completely unsettled my player, but if that's how they do their business then so be it.

"As I said, it completely unsettled my player, clearly from his performance, but he isn't for sale so they can bid as much as they want, he isn't going."

"I thought my players were fantastic today. I said to them before they're an extremely talented bunch of players and they took it on board.

"I think we by far had the most shots, probably we could have had more. It certainly wasn't smash and grab but we certainly did deserve the game.

"I've reiterated right from the start that nobody is beyond being dropped and anybody who does well in the team will keep their place in the team."