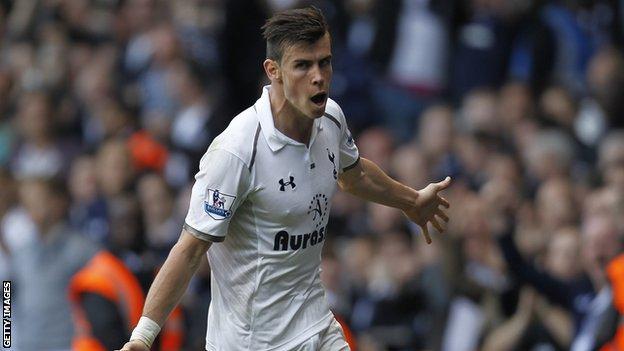 Former Real Madrid winger Steve McManaman says Gareth Bale will have to focus on his football in the intense spotlight at the Spanish club.

The Tottenham midfielder, 24, is believed to be the subject of a world record bid from the La Liga side.

McManaman, 41, said: "Everybody will want a slice of him.

"Everybody will want to speak to him about his car, shoes, whether he's had a haircut, what house he lives in, who's his gardener."

The Wales international's transfer has yet to be agreed, but it could happen in the coming days and is set to eclipse the £80m world record fee Real paid Manchester United for Cristiano Ronaldo in 2009.

Former England and Liverpool winger McManaman, who won two Champions Leagues and two La Liga titles in four years at Real, told BBC Radio 5 live's Sportsweek programme: "Real Madrid is a different animal to Tottenham. He knows the spotlight will be on him.

"He knows the transfer fee will be huge and the pressure will be on him. It will not come as a surprise to him.

"Most importantly, if he goes out onto the football field and performs the way he has done, he will win everybody over in a heartbeat."

The number 11 shirt, which Bale wears at White Hart Lane, has been left vacant at Real Madrid in the expectation their new record signing will take it on his arrival - an arrival which McManaman said would be accompanied by much fanfare.

"He knows he's going to have to learn the language and adapt to Spanish life.

"The good thing for Gareth is the likes of Cristiano Ronaldo, Xabi Alonso and Alvaro Arbeloa all speak English, as do coach Carlo Ancelotti and his number two Paul Clement, so he will go in and have familiar voices.

"But he will still have to go out and show willing and want to learn the language, and adapt to the Spanish lifestyle."