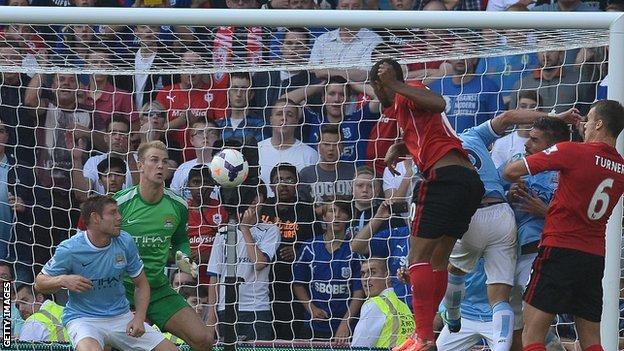 The Welsh side trailed to Edin Dzeko's long-range strike after the break.

But Aron Gunnarsson equalised and two Fraizer Campbell headers secured a thrilling victory for the hosts.

Manchester City only lost once after leading in the Premier League throughout the whole of the last campaign but have won only one of their four away games against newly promoted sides since the start of last season.

"The worst thing is that we got ahead. After we scored I thought it would be easier but two corners decided the game," Pellegrini said.

"It was a pity. I did not expect to lose. We didn't play well but they played with 10 players near their box so it was very difficult to score."

Manchester City, who were impressive in the 4-0 demolition of Newcastle in their opening match of the season, dominated possession for long spells but did not create many chances.

But having gone into the lead seven minutes after the break, Pellegrini expected more from his side.

"In the second half, we improved, but, after we scored, they scored from two corners and that decided the game," the ex-Malaga boss added.

"Set pieces are very important and we try to work at it. They did better than our defending.

"We must continue working. We have just started and not a lot of teams will win here. They are not an easy team to play."

City's next game is against another promoted side, Hull City, although Saturday's game will take place at the Etihad.