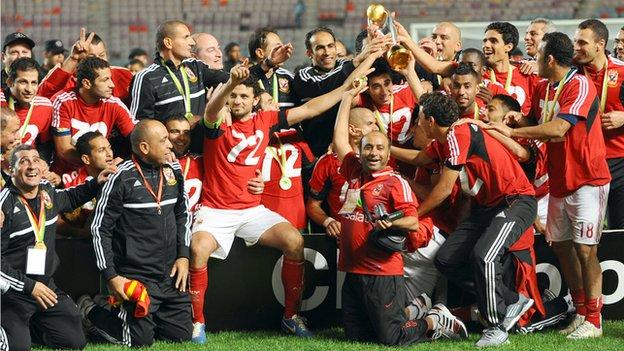 The Confederation of African Football (Caf) has confirmed that two key African Champions League matches, involving Egyptian sides Al Ahly and Zamalek, will go ahead in Egypt next weekend despite the continued civil unrest affecting the country.

Holders Al Ahly will play AC Leopards of Congo on Saturday at El Gouna, followed the next day by Zamalek versus South Africa's Orlando Pirates.

I'm really dismayed with the decision to play there; the pitch is so poor, temperature is high and air currents there affect our game.

The two popular Egyptian clubs are both competing in Group A where Pirates lead at the halfway mark with seven points.

Ahly have four points along with Leopards, and Zamalek are rooted to the bottom of the group with a single point.

Both games will be played behind closed doors at the insistence of Egyptian authorities who fear that unruly crowds could lead to more unrest.

The major concern could be the extreme heat. A lack of adequate floodlights at the small stadium means both matches kick off at 4 p.m. local time (1400 GMT) in temperatures forecast between 28 and 38 degrees celsius.

Ahly coach Mohamed Youssef suggested at the weekend he would rather have played outside Egypt than in El Gouna because of the heat.

"I'm really dismayed with the decision to play there; the pitch is so poor, temperature is high and air currents there affect our game," he told reporters.

Egypt's military are not allowing any football in Cairo or the country's second city Alexandria.

Pirates did ask for their match to be moved to a neutral venue but were turned down by Caf.

The Egyptian league was cancelled after the military overthrow of president Muhamed Mursi's government and subsequent violence but participation in international competition continues.