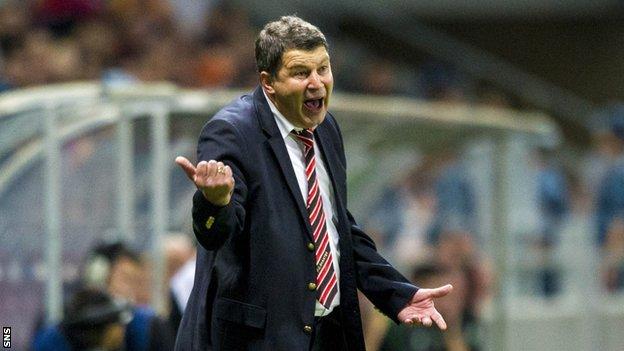 The defending champions were held 1-1 at home by Irtysh in the Kazakhstan Premier League.

But manager Viktor Kumykov selected just one player who featured from the beginning of their 2-0 first-leg win over the Scottish champions.

The suggestion in Kazakhstan is the "miners" have deliberately refocused from the championship they have won the last two seasons to their European campaign, so long as that is in the Champions League.

The losers of the play-off tie will go directly into the group stages of the Europa League, though it seems attention may turn back to domestic matters in the event Shakhter parachute into Uefa's secondary club competition.

The fielding of an essentially reserve side against Irtysh comes a week after Kumykov rested half of his team ahead of the first leg when the club defeated FC Astana in the capital before beating Neil Lennon's men in the same stadium.

As for the match itself, Shakhter led 1-0 through a goal from defender Yevgeni Tarasov - who was an unused sub against Celtic - 12 minutes from half-time before that was cancelled out four minutes later.

The result leaves the club five points off the league leaders Aktobe.

Shakhter are due to arrive in Glasgow on Monday afternoon.

Celtic have successfully overturned a 2-0 away first-leg deficit in three of the four occasions they have been faced with the task.

Only once have they failed to recover a 2-0 deficit in a home return leg, a 1982/83 European Cup second-round tie when Real Sociedad went through despite a 2-1 home win over the Spaniards.