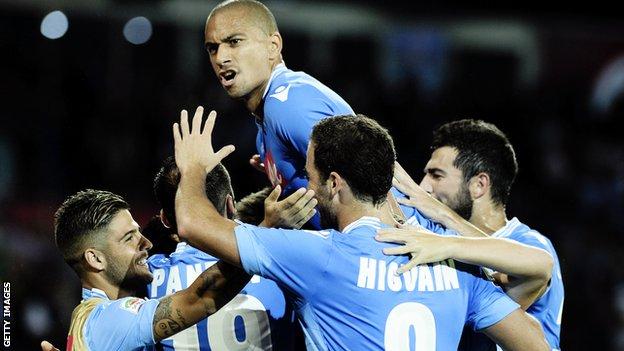 Rafael Benitez enjoyed a winning start to his career as Napoli boss as they secured an emphatic 3-0 victory over Bologna on the opening weekend.

The Spaniard took charge of last season's Serie A runners-up in May, after his spell as Chelsea interim manager ended.

Napoli were dominant from the outset and opened the scoring when Jose Callejon tapped in a rebound.

Marek Hamsik made it 2-0 from close range, before rifling in a third.

Rafael Benitez is back in Serie A for the first time since December 2010. The former Inter coach made his debut in the Italian top flight in August 2010 in a goalless draw at Bologna.

Like Benitez, on-loan Liverpool goalkeeper Pepe Reina was making his competitive debut, but he found himself untroubled throughout.

Instead, almost all the chances were created by Napoli, their first coming early on when Callejon hit the woodwork.

But the former Real Madrid forward did not have to wait much longer to mark his debut with a goal. Hamsik's stinging drive was palmed into the path of Callejon by Bolgona keeper Gianluca Curci and he put the loose ball into the net.

Hamsik was causing all sorts of problems for Bologna and his persistence brought Napoli their second goal just before half-time. The midfielder forced his way into the area and rounded Curci before finishing from a tricky angle.

Any hopes of a Bologna fightback were ended just after the hour when Hamsik lashed a powerful drive into the back of the net after being set up by Goran Pandev.

Elsewhere, Rudi Garcia oversaw victory in his first game as Roma coach as they defeated promoted Livorno 2-0 away while Lazio edged Udinese 2-1.