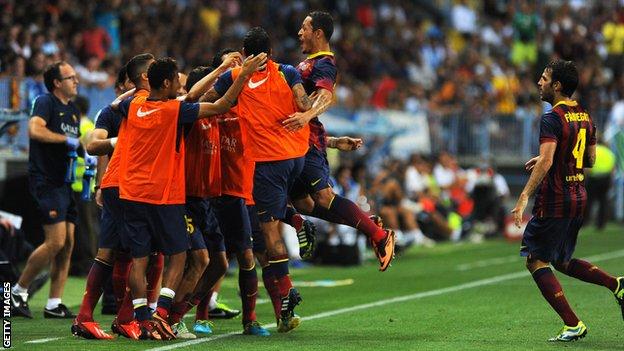 A goal by defender Adriano maintained Barcelona's 100% winning start as the reigning Spanish champions secured a hard-fought 1-0 win at Malaga.

The Brazilian struck in the 44th minute as Malaga keeper Wilfredo Caballero allowed the 28-year-old's attempt to squirm under his body.

Adriano's last goal for Barcelona came in a 4-1 win over Atletico Madrid on 16 December 2012. The 28-year-old now has eight goals in 67 La Liga games for the club.

Barcelona were without injured forward Lionel Messi, who was nursing a bruised thigh, but now have six points from their first two league games without conceding a goal.

"In the last five minutes we struggled but sometimes you have to do that," said midfielder Cesc Fabregas.

"It was a hard-fought and important victory."

Atletico Madrid also made it two wins from two games after an easy 5-0 win over Rayo Vallecano.

Levante responded to a 7-0 thrashing at Barcelona in their previous outing by securing a point after holding Sevilla at home to a goalless draw.