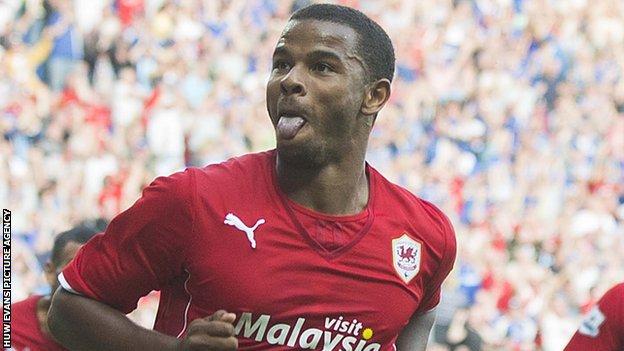 "I think he is worth multi-millions. I thought when we got him we got him for a fantastic price," Mackay said.

Mackay believes if the former Manchester United player continues to show Sunday's form he could get back into the England team, who he played once for in 2012.

Fraizer Campbell showed against top, top defenders that if he... keeps playing like that there's a chance eventually he will be considered for England again

"He was coming to the end of a contract [at Sunderland] and I thought it was one of those situations where you are in the right place at the right time for a player," added Mackay.

"I think he needed belief. He needed to be fitter and he needed the staff to put an arm round him and tell him what a talent he was.

"I firmly believe in him and I think he has got a lot of ability.

"He showed against top, top defenders that if he keeps his head down, keeps working and keeps playing like that there's a chance eventually he will be considered for England again."

Mackay put into perspective the victory over Manchester City, especially as his side came back from 1-0 down.

"Manchester City have lost one game last season from a winning position so we knew the toughness of the task," said Mackay.

"As the game grew, we grew. We showed in the second half that we certainly had belief to attack them and deservedly won the game.

"It means they [the Cardiff players] have set themselves a very high standard, but it shows our stadium can be a hard place to come. It was last year. When the three goals went in I thought the roof was going to come off.

"That's the belief they should have in themselves. They went out there tactically, the discipline they showed and the way they played means that they absolutely deserve to be there.

"I'm really, really pleased for everyone associated with the club. It was an important day for the club.

"To serve up that attraction is something they should be very, very proud of."