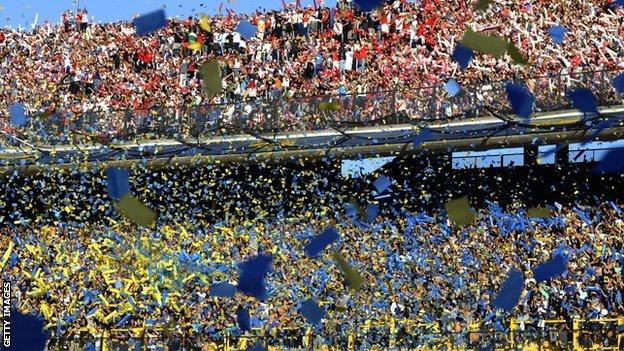 Last weekend marked the centenary of one of the world's great local derbies, River Plate against Boca Juniors, the Buenos Aires "Superclasico".

Big derby matches are fundamental to the South American footballing tradition; it could hardly be otherwise in a continent where distances are vast and many of the countries are dominated by one major city.

The history of the South American club game is largely one of local rivalries, and none come bigger than Boca-River.

There are two main reasons for this. One is Argentina's role in spreading the game. If the British introduced football to South America's south, it was Argentines who did more than anyone else to carry the sport northwards.

In many aspects of football, from terrace chants to the organisation of the calendar, much of the continent has tended to take its cues from Argentina.

The other is the social context of the Boca-River game, which forms a template for the big derbies all over the continent. The fault line, so strong in South American societies, is that of the haves against the have-nots.

Boca Juniors and River Plate both grew up in the working class Boca area of Buenos Aires, with its docks and meatpacking plants. Boca are still defiantly there. River have long moved out to the snooty suburbs.

Both clubs inaugurated their current stadiums, and cemented their respective identities, just as Argentine football was about to enter its 1940s golden age.

Of course, both River and Boca have fans from all across the social scale. Even so, the derby retains its essence. As well as mere tradition, geography and architecture ensures that it does.

At Boca there is no space; the streets around the ground are cramped and narrow, the stadium itself is forced to go straight up, hence its nickname - La Bombonera, the chocolate box, with layers piled on top of each other and the fans close to the pitch.

At River there is space aplenty. The ground is known as the "Monumental", and it feels huge. Surrounded by broad avenues, the stadium is a giant, gently reclining bowl, with a running track leaving the fans far from the action. Some of the corridors inside the ground are so wide you feel you might be inside the United Nations building.

Different architecture produced different atmospheres and contrasting identities. Boca is set up for sweat and sacrifice, River for something a bit more cerebral. This, of course, is a gross over-simplification.

The ultra-cerebral playmaker Juan Roman Riquelme is Boca's biggest idol in recent years. His predecessor, Diego Maradona, was far more in keeping with the populist, emotion-driven ethos of the club's support.

Boca-River and other major derbies are clearly hugely significant occasions. But, for what it is worth, they can often leave me feeling uneasy.

Football offers two great pleasures. One is the chance to assess rationally the match that unfolds before your eyes. The other is the possibility of losing yourself in the emotion of the event.

The big derbies can often supply not enough of the first, and more than enough of the second. So often they can generate more heat than light. Charged by negativity, the derby can seem like a 90 minute version of George Orwell's "Two Minute Hate" from the novel 1984.

I well recall travelling by bus some 15 years ago to the biggest, most vociferous derby in my adopted city of Rio de Janeiro, Flamengo against Vasco da Gama, the "Classic of the Multitudes".

As we approached the ground a gun battle was raging. Everyone in the bus hit the floor. Old people were terrified, children were wailing and I remember wondering if it was all worth it. Over the past couple of years I am informed that Brazil leads the world in the number of football related deaths, and local rivalries are usually at the heart of the matter.

These ruminations are inspired by the fact that my brief visit back to London coincides with the build-up to next weekend's Arsenal-Tottenham game. The north London clash always used to be one of my favourite derbies, because the fault line was as much philosophical as anything else.

After so much time away I am no longer so sure of my bearings. For all the rumpus about Arsenal's transfer tardiness, the Arsene Wenger, Emirates stadium outfit come across as a different, far more cosmopolitan club than the one I remember. And so what is the fault line now? Is it merely the tradition of two tribes who congregate near opposite ends of the Seven Sisters Road?

In one of his best musings on football, journalist Hunter Davies recalls being at White Hart Lane when the crowd embarked on the inevitable chants of "stand up if you hate Arsenal". Only Davies and an old supporter nearby were immune to the call.

"I'm too old to stand," replied the man.

Q Any thoughts on Newell's Old Boys striker Ignacio Scocco? I saw him play for Newell's last season in the Copa Libertadores and he was consistently dangerous. Did he go to Europe too soon (he had a three-year spell with AEK Athens in Greece), or is he just not quite good enough to play for an elite team?

A An excellent striker, who stands out for the fluidity and intelligence of his movement. It could be that the way Scocco was used as a roving number nine was an important factor in his coach Gerardo Martino being given the Barcelona job.

Scocco has also recently moved on - he's joined Internacional in Brazil, where he is already scoring goals.

Q What are your views on Abel Hernandez? Just turning 23, and with the World Cup next year, do you feel a move from Palermo to a major club would/should have been on his agenda? How good do they feel he can become in Uruguay?

A After some injury problems he could probably do with a season of consolidation. He's so quick, with a lovely burst of acceleration and a nice left foot. He's highly rated in Uruguay, and a consistent member of the senior squad, although the excellence of Luis Suarez, Edinson Cavani and Diego Forlan means that chances are restricted.

There's more competition on the horizon now, with the emergence of Under-20 star Nico Lopez. But providing he can stay fit, Hernandez should be part of the Uruguay set-up for years to come. Providing they qualify, he might be an interesting impact substitute in next year's World Cup.