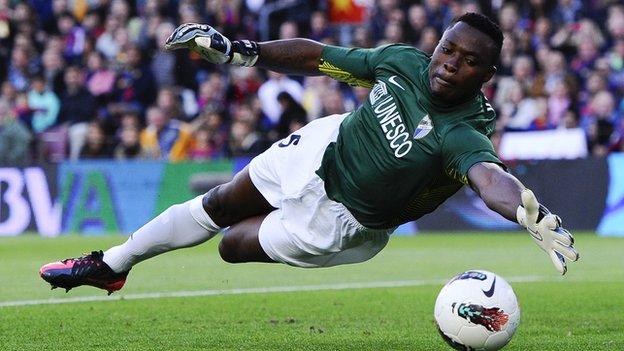 Cameroon lead Group I by one point from Libya.

And Finke has opted for experience at the back in Kameni, who has been to two World Cups and five Africa Cup of Nations.

However, the Malaga stopper last played for his country in September 2012 when Cameroon were beaten 2-0 to Cape Verde in the first leg of their 2013 African Cup of Nations qualifier.

Also making his comeback is striker Idrissou Mohammadou, who has scored six goals in six matches for his German club FC Kaiserslautern.

He last played for Cameroon against Cape Verde in Yaounde in the second leg of their qualifier, which saw Cameroon eliminated from qualification despite a 2-1 win

Gaetang Bong and Jean Armel Kana Biyik are also returning to the team but Fabric Olinga has dropped down to the reserve list.

Up front, Cameroon will look for inspiration from Samuel Eto'o and Choupo Moting.

Finke has not called up any players from the Cameroon league.