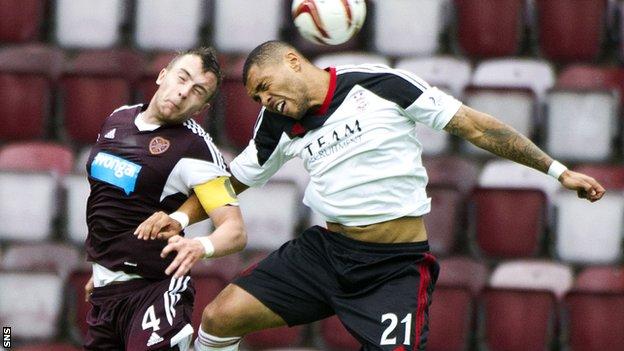 Hearts captain Danny Wilson has been handed an automatic one-game ban for receiving a red card after the final whistle against Aberdeen on Saturday.

There is no appeal against a ban for such an offence.

Ahead of the ban's confirmation, Locke insisted he did not know if Wilson had actually been disciplined after the match.

"I don't want to comment as I don't know enough about it," he said. "I'm still waiting to hear the report of that one and I'm very much in the dark about that just like anyone else is."

But an SFA spokesman told BBC Sport: "The fourth official, Iain Brines, instructed Wilson that he would be reported to the Scottish FA for the use of offensive, insulting and abusive language.

"This happened in the referee's dressing room after the match and a Hearts representative was present."

Meanwhile, Locke is also planning to during the win over Aberdeen.

Should he remain banned, the Scotland Under-21 international will miss Saturday's Premiership game.

However, both he and Wilson are free to play against Raith Rovers in Tuesday's League Cup tie at Stark's Park as their offences only apply to league games.