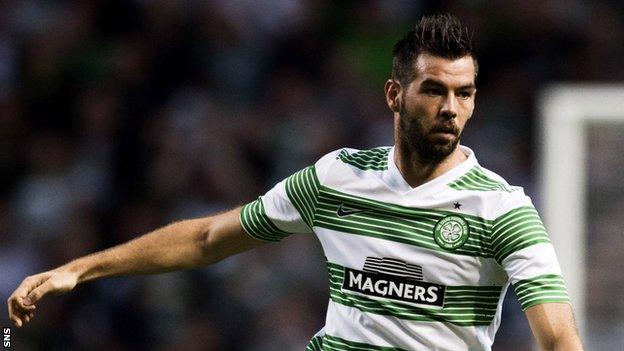 Celtic players face one of the biggest games of their lives in Wednesday's Champions League play-off, according to midfielder Joe Ledley.

Trailing 2-0 from the first leg against Shakhter Karagandy, Ledley said securing a place in the group stage is crucial to their season.

"It's the biggest club competition to play in with the best teams in the world," said the Welshman.

"It was fantastic last season and we want more."

Celtic progressed to the last 16 of the Champions League last term before losing to Juventus.

And the departures of Victor Wanyama, Gary Hooper and Kelvin Wilson have made their task more difficult.

Nevertheless, Ledley is confident they can overturn the first-leg deficit against the Kazakh side.

"We've still got another 90 minutes to play," he said, "So hopefully on Wednesday night we come out, play strongly, attack straight from the first whistle and get the victory we need.

"And, with the fans behind us, anything can happen.

"We've scored a lot of goals at Celtic Park before and we know we can do it again.

"We need the group stages as a club and as a team. But we know it's going to be very difficult.

"Shakhter defend well as a unit and it will be hard to break them down."

Celtic have successfully overturned a 2-0 away first-leg deficit in three of the four occasions they have been set the task.

Only once have they failed to recover a 2-0 deficit in a home return leg, a 1982-83 European Cup second-round tie when Real Sociedad went through despite a 2-1 home win over the Spaniards.

Ledley believes the Celtic fans have an important role to play in the second leg.

"Nothing can beat a Champions League night here," he said.

"And the night we played Barcelona was one of the greatest moments of my life. The atmosphere was fantastic that night as well.

"The fans will play a massive role. The fans have been brilliant ever since I've been here and I'm sure they'll be the same on Wednesday night under the floodlights at Celtic Park; they'll be with us straight from the off."