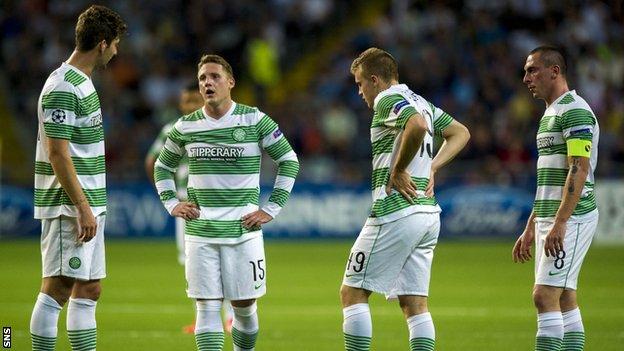 While the challenge may fall just shy of scaling Everest, Celtic are craning their necks at the task ahead.

Concede an early goal in Glasgow and the scale of the task would make Everest-conqueror Sir Edmund Hillary baulk.

However, score within the first 10 minutes and the spirit of Sherpa Tenzing Norgay will ride on Celtic shoulders with adventurous glee.

Play with your heads and don't make any silly mistakes. Celtic can win this game there's no question about that

The Glasgow club's incredible victory over Barcelona in last season's Champions League will live long in the memory; the two legs against the Kazakstan outfit may also linger for different reasons.

Missing out on the competition boasting what Joe Ledley describes as "the best teams in the world" renders the proposition as attractive as the desolate landscape described in Cormac McCarthy's The Road.

Granted, a move to Celtic offers top players the chance to adorn their trophy cabinets with league and cup medals, but that infamous Champions League tune is what really sets the pulse racing before signing on the dotted line.

Reports of sheep being sacrificed by Shakhter in the hope of boosting their victory hopes will not pull the wool over Celtic supporters' eyes: progress is a must.

Playing such important games this early in the season poses many risks, one of which is trying to fashion a settled team.

Manager Neil Lennon has yet to decide on his favoured central defensive partnership.

Wilson's return to Nottingham Forest, and the decision to bench Efe Ambrose for the first leg, saw Steven Mouyokolo and Virgil van Dijk pressed into action in Kazakstan.

However, both perhaps understandably struggled and, illustrated by Shakhter's opening goal triggered by a long throw, the uncertainty appears to have shaken goalkeeper Fraser Forster's confidence too.

The fact Inverness Caledonian Thistle also scored following a long throw at the weekend means Lennon doesn't have his defensive troubles to seek.

Yet it's further up the pitch where Celtic also need to sharpen up in Wednesday's second leg.

With Shakhter expected to form a defensive shield around Alexandr Mokin's goal, Celtic will have to be patient and innovative in search of the breakthrough.

Georgios Samaras has looked ill-at-ease in the central striker role, with drifting in from the left wing appearing to be his most effective position.

Amido Balde and Anthony Stokes look likelier providers than goalscorers and the Celtic manager will be keen to address the lack of width in the side.

When James Forrest is either injured or marked out of a game then the onus is on the inconsistent Emilio Izaguirre to provide ammunition into the box.

Perhaps a better plan would be to push Adam Matthews forward on the right flank in the hope the Welshman can stretch Shakhter.

Kris Commons was Celtic's best attacking threat in the first leg and will no doubt test Mokin with shots from distance.

Winger Derk Boerrigter, a summer signing from Ajax, is struggling to be fit for Wednesday's encounter, so Matthews may be asked to create width on the opposite flank from Samaras.

Former Celtic goalkeeper Pat Bonner insists the side can progress if they keep cool heads in the white-hot atmosphere.

Bonner, with more than 600 appearances for Celtic and 80 caps for the Republic of Ireland, has a tip for his former club.

"They have to play with their heads; don't let the heart take over," he told BBC Scotland. "You've got to use your head and go about your business.

"And you have to think about the opposition. They'll have travelled a long distance for the game. Yes, they're 2-0 up, but they're not that good a team.

"Play with your heads and don't make any silly mistakes. Celtic can win this game, there's no question about that."

Celtic comebacks from 2-down in first leg in Europe

And Bonner believes the Celtic fans will have a role to play in the bid to clinch a place in the group stage.

"The fans can be a real help," he said. "I remember playing against Sporting Lisbon in the Uefa Cup in 1983 and we were 2-0 down from the first leg.

"We just went out and absolutely walked over the top of them; everybody was 'tuned-in' that night. We all played exceptionally well, both in an attacking sense and defensively.

"I don't think Sporting Lisbon knew what had hit them, plus we had the crowd on our side and they can prove a real asset."

So who could be a potential match-winner for Celtic?

"It depends who's fit," said Bonner. "The likes of James Forrest and Anthony Stokes [can turn a game] and, with Charlie Mulgrew's deliveries into the box, hopefully the likes of Samaras and Ledley can get on the end of them."

Should Celtic scale their Kazakh summit, they'll enjoy the view and savour the Champions League riches awaiting them below.