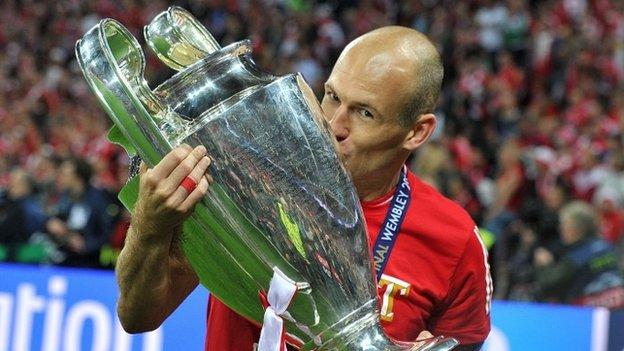 It has been a turbulent summer for Europe's leading clubs, and not just in the transfer market.

Champions League holders Bayern Munich and the rest of the top five in Uefa's European club rankings - Barcelona, Chelsea, Real Madrid and Manchester United - have all changed their manager, as have big-spending Manchester City and Paris St-Germain.

With the Champions League group stage draw taking place in Monaco on Thursday, BBC Sport looks at how the continent's elite sides are shaping up for the new European campaign.

The big changes: New managers at Nou Camp and the Bernabeu for a start, in the shape of Gerardo Martino and Carlo Ancelotti. Atletico Madrid's Diego Simeone is actually the only manager from last season's top six in La Liga to still be in his post.

La Liga expert Andy West: "It would be a significant failure if Real and Barca did not progress at least as far as the semi-finals.

"However, Barca's self-belief was dented by the humiliating manner of their semi-final defeat against Bayern Munich last season, and the fact that their legendary former coach Pep Guardiola is now in charge of the Bavarians only adds to the fear factor.

"While we wait to see whether Real capture Gareth Bale (above), they have already bought one player who is poised to make a huge impact on the Champions League - fellow attacking midfielder Isco. He performed magnificently on the European stage for Malaga last season and has made a sparkling start to his Madrid career. He is undoubtedly a world-class superstar in the making.

"Like Malaga last season, Atletico Madrid and Real Sociedad have the ability to become the tournament's dark horses."

"I don't know David Moyes very well but he did some good things at Everton. I think United thought a long time about making a good choice for their next manager after Sir Alex Ferguson and they know what they are doing - he will do well.

"There were no English clubs in the quarter-finals of the Champions League last season but I am convinced that will not happen this time. With Jose Mourinho at Chelsea and Manuel Pellegrini at Manchester City, they will be strong."

The big changes: Three of last season's Premier League top four have a new manager - David Moyes at United, Manuel Pellegrini at City and the return of Jose Mourinho (above) to Chelsea.

Manchester City, who are ranked 22nd in Europe in Uefa's seeding system, hope their new boss Manuel Pellegrini repeats his habit of chucking the coefficient out of the window. In 2005-06, he took Villarreal (ranked 24th) through qualifying and to the semi-finals.

Last season, with Malaga (ranked 106th), he topped his group and came within 30 seconds of beating Borussia Dortmund in the quarter-finals.

"There is little doubt that in their current guise they lag behind giants such as Bayern Munich, Barcelona, Real Madrid and even the exciting Borussia Dortmund.

"Moyes is short of serious European experience so it will be a case of learning on the job and there is no easing in at Manchester United.

"Jose Mourinho was thwarted in the Champions League during his previous spell with Chelsea but he will feel he has the squad to make an impact once more after winning it with Inter Milan during his time away from Stamford Bridge.

"Manchester City have had a wretched time in the Champions League previously but this is a competition new coach Manuel Pellegrini has experience of with the likes of Real Madrid, Villarreal and Malaga so they will hope for better, while Arsenal will hope for new signings and a kind draw at the group stage."

"Bayern and Dortmund will be just as strong this season. They showed us already last year how good they are and they are two of my favourites to reach the semi-finals of the Champions League. Bayern, especially, will be a threat. And, if Dortmund keep their team together and Robert Lewandowski for example stays, then they are a very good team also."

The big changes: Can Pep Guardiola (above) maintain Bayern's brilliance from last season or even improve on it? That's the most interesting question in German football right now.

There is no change at Dortmund or Schalke but Sami Hyypia is now the sole man in charge at Leverkusen - there was an uneasy partnership with Sascha Lewandowski last season.

Bundesliga expert Raphael Honigstein: "Bayern are one of the favourites to win the competition. Dortmund are easily quarter-final material again, with the potential to kill a giant or two.

"Thiago Alcantara and Mario Gotze have strengthened what was already a superb Bayern team. The latter looks set to play a pivotal role but there'll be a lot of rotation to keep everyone happy.

"Dortmund's new boys Pierre-Emerick Aubameyang and Henrikh Mkhitaryan have brought quality and depth to their front-line. They will miss Gotze, but have replaced him well.

"Leverkusen and Schalke will focus on getting to the last 16. Both could go a little further, provided the draw is kind to them, but neither can harbour any realistic ambitions to win the trophy."

"With the arrival of Carlos Tevez, Juventus look a very strong team and AC Milan have made some good signings in the last few months, but we don't really know how well the new players like Gonzalo Higuain will settle in at Napoli."

The big changes: Last season ended with speculation over Antonio Conte's future as Juve boss but, of last season's top three, only Napoli have a new man in charge - Rafael Benitez, who has been handed the proceeds of the £55m sale of Edinson Cavani to PSG and has been spending heavily to reshape his squad.

Serie A expert James Horncastle: "Juve have definitely got stronger over the summer. Carlos Tevez (above) and Fernando Llorente address the need for a reliable goalscorer and should increase their chances of a third straight Serie A title.

"Juve should go further in Europe this season too. They will have learned a lot from last year's exit to the eventual winners Bayern in the quarter-finals."

The big changes: Vitor Pereira leaves Porto for Saudi Arabian club Al-Ahli after winning two successive titles. He is replaced by Paulo Fonseca (above), who took Pacos de Ferreira into the Champions League qualifying rounds with a third-place finish in his first season as a top-flight manager.

"Paris St-Germain have spent a lot of money but, for me, the Champions League is between teams from Spain, Germany and England - the usual suspects, rather than any surprises.

"That means Real Madrid and Barcelona, Bayern Munich and Borussia Dortmund, and Chelsea, Manchester United and Manchester City will be strong."

Primeira Liga expert Andy Brassell: "Paulo Fonseca is only 40 but has impressed early on. Benfica have kept faith with Jorge Jesus despite a disastrous end to last season, but a poor start would put him under pressure. Costinha, Fonseca's successor at Pacos, will not be fettered by high expectations and aims to consolidate.

"Porto's well-stocked squad suggests - on paper - they could go deep into the Champions League after recent disappointments. Benfica may want to concentrate on wresting back the domestic crown, but the country is set to have four representatives in the Europa League - Vitoria Guimaraes, Braga, Estoril and Pacos de Ferreira, who lost 4-1 at home to Zenit St Petersburg in the first leg of their Champions League play-off."

"French football has made a big step forward with the money being spent by Paris St-Germain and Monaco right now.

"PSG already had a good run in the Champions League last season and they will be one of the outsiders to do well again."

The big changes: Laurent Blanc, who steered Bordeaux to the Champions League quarter-finals in 2009-10, replaces Carlo Ancelotti at big-spending PSG.

Ligue 1 expert Matt Spiro: "Even the most optimistic Lyon or Marseille fan would admit their side has little chance of winning the Champions League. Both clubs will focus on trying to win domestic trophies, while getting as much as possible out of their European campaigns. PSG, however, are a different matter.

"Having held on to their best players, and added some more exceptional talent, the capital side are capable of improving on last season's quarter-final appearance.

"Indeed, while there is a new coach in the dugout, PSG have more continuity on the pitch than many of their European rivals. In Salvatore Sirigu, Thiago Silva, Blaise Matuidi, Edinson Cavani (above) and Zlatan Ibrahimovic, they boast one of the most formidable spines in world football.

Since August 2010, Radamel Falcao has scored 30 goals in the Europa League, 18 more than any other player in that time. New PSG capture Cavani is the next highest with 12.

"The big question mark is Blanc's ability to manage the many personalities and egos at the club. The former Manchester United defender struggled to keep France's dressing room under control at Euro 2012, and may lose the confidence of big names like Ibrahimovic and Thiago Silva if the results aren't good immediately."