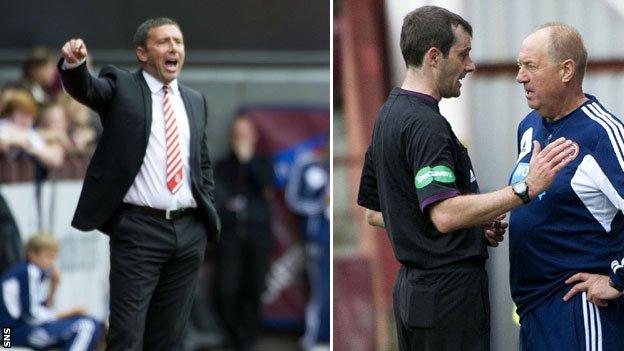 The pair clashed following Jordan McGhee's late winner for the hosts in the Premiership game on Saturday.

The judicial panel allege they have breached Rule 203 by leaving their respective technical areas.

Speaking after the game, McInnes said: "We will take whatever the consequences are when it comes."

The incident saw referee Alan Muir send the pair to the Tynecastle stand with emotions running high as 10-man Hearts went 2-1 up.

Speaking before receiving the notice of complaint, the Aberdeen boss said: "I would expect a call or a letter, and rightly so. I was surprised to see an opposition member or staff in my technical area, regardless of celebrating a goal or not.

"That was disappointing. What is also disappointing is my behaviour. I should not react like that and I apologised for that after the game.

"Billy apologised too, but that's not going to be the end of it and we will take whatever the consequences are when it comes."

"You think you are a bit harshly done by and then you score a winning goal.

"Anybody that doesn't show a bit of passion, questions would be asked.

"I didn't think Billy did a lot wrong. His momentum took him into their technical area. I didn't think he could move that quickly.

"It's something out of nothing."