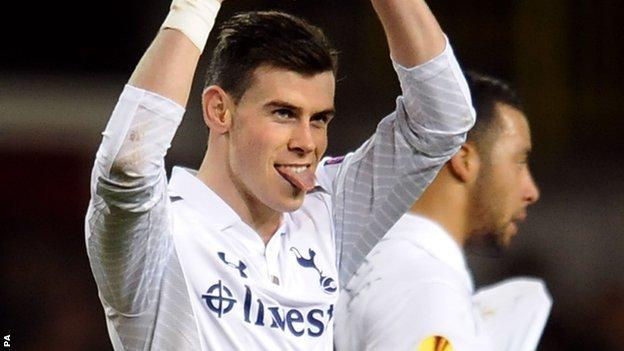 And on Monday United boss David Moyes refused to deny his side's interest in signing Bale.

"The whispers around the club are that he's Old Trafford-bound," said former Wales and United winger Thomas.

"That might be more in hope than anything else but it could happen, because by all accounts Real Madrid have not got all the money to put down for Gareth Bale and by all accounts they owe money for Luka Modric [who left Spurs to join Real for around £30m in August 2012].

"So that might not happen and he might be Old Trafford-bound. That would be great news for Welsh football and certainly for Manchester United."

"Man United have got fortunes to spend and there was talk that the second club involved wasn't Chelsea, it was Man United," Horne said.

"That would make sense: one fantastic, left-footed, talisman genius is close to retirement so you replace him with another - makes perfect sense.

"It wouldn't cost United £86m because... at this point in the game Spurs are a little bit exposed to the tune of £55-60m [with the new players bought].

"The only thing that I can think of is that there are subsequent deals in the offing... it's not difficult to understand that [Wayne] Rooney, [Luis] Suarez, [Juan] Mata could all be linked - and even the top man himself, [Cristiano] Ronaldo."

After his side's 1-0 win over Swansea on Sunday, Spurs coach Andre Villas-Boas said he expects Bale, who has been in Madrid this week, to be back at training on Tuesday if a deal has not been agreed with Real.

Bale travelled to the Spanish capital over the weekend to discuss the move.

Real beat Granada 1-0 away from home on Monday, having won their opening La Liga fixture 2-1 at home to Real Betis.

Their next home game will be on Sunday - a day before the transfer window closes on 2 September - against Athletic Bilbao.