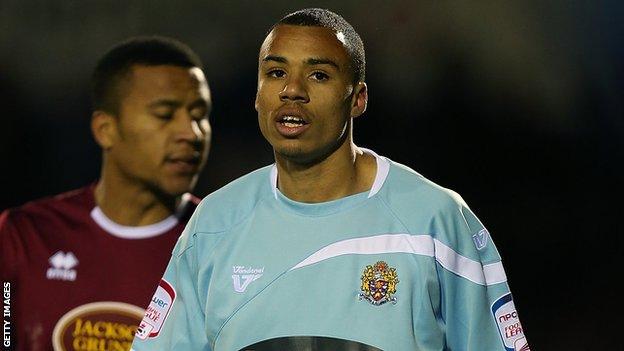 St Mirren have completed the signing of on a season-long loan.

And the 20-year-old will go straight into the squad for Tuesday's League Cup game against Queen of the South.

Manager Danny Lennon said: "He is a versatile player who can play in a number of positions.

"What he does have is tremendous pace and mobility, with the potential to make a positive impact on games. He's a young player with a bright future."

London-born Caprice, who can also play at full-back, began his senior career with Crystal Palace but was released in summer 2012 after failing to break through into the first team.

He joined Championship rivals Blackpool on a one-year contract and was .

Caprice played eight times for the League Two outfit during his month-long stay with the Daggers.

"So he'll add to the good quality and the competition we have in that area."

But Lennon's has hit a stumbling block.

"Everything was agreed, but the frustrating part of that side of things is that you deal with one or two agents.

"And, right at the last minute, there was an extra demand placed upon us, so we will address that situation this morning."

League Cup holders St Mirren in the second round of the competition still looking for their first victory of the season.

However, Lennon insists he does not feel under pressure despite his side having only tasted victory once since their triumph at Hampden Park in March.

"Pressure is something you really place on yourself," he said.

"I am mentally strong and I've got great belief in the quality and character of the players we have at our club, who have great potential and are capable of winning any football game."

Asked what had gone wrong since the final, Lennon said: "There's a number of factors: there's one or two new personnel came in, the success of the cup last season and how players who are not used to success handle that."

The St Mirren manager is hoping that another cup run will ignite his side's season.

"Wining the cup last year was such a highlight for everyone associated with the club," he said.

"It was only the fourth time in their 135-year history that they had it had won a national trophy and the celebrations lasted a long time and we want more of that level of success.

"We know how hard we had to work for it last year and we'll need to work as hard to lift silverware this season."