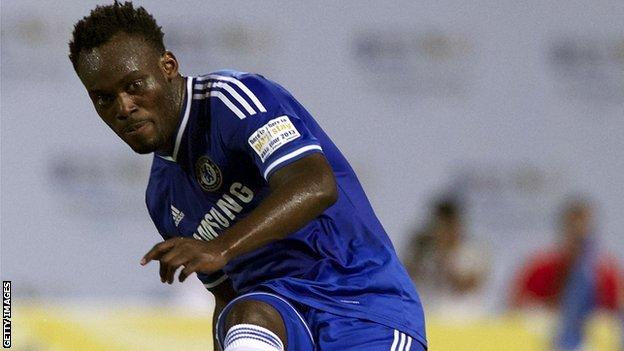 But there is no place on the list for Marseille's Jordan Ayew or AC Milan's Sulley Muntari.

Essien has not played for Ghana since facing Congo in June 2011 .

He then took a break from international football to concentrate in his club career following some serious injuries.

The 30-year-old has returned to play for Chelsea in the English Premier League this season after spending last season on loan at Spanish giants Real Madrid.

Boateng and both Ayew brothers wrote to the Ghana Football Association (GFA) last week to officially rescind their decisions to retire from international football.

The GFA had also accepted a written apology from Muntari for an incident in the dressing room following the 2-0 win over Lesotho in June, despite this Appiah has not called on his services.

DR Congo-based defender Richard Kissi Boateng is also included after being cleared by Fifa to play, following his red card in June's 3-1 win in Sudan in a 2014 qualifier.

The squad will begin a training camp for the Zambia match, as well as a friendly in Japan four days later, in Kumasi on 2 September.

The Black Stars know a draw on 6 September will take them through to the final round of World Cup play-offs.

Zambia must win the match in Kumasi if they are to progress.