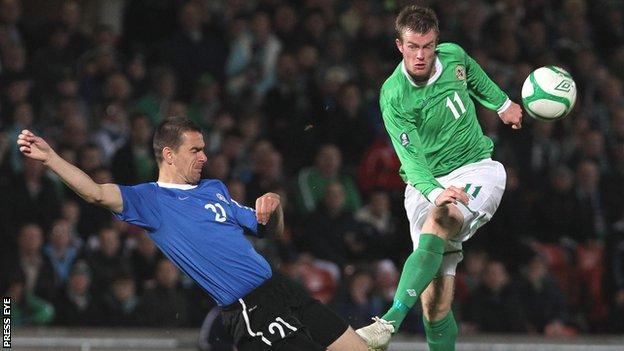 The West Brom player, who missed the 1-0 win over Russia a fortnight ago, is recalled to the 22-man panel.

Kyle Lafferty (Achilles) and Jonny Evans (illness) return after pulling out of the Russia game in Belfast.

Paddy McCourt has yet to play for his new club Barnsley and is omitted for the double-header.

Chris Baird also misses out once again, having yet to sign for a club since his release by Fulham.

Peterborough player-coach Grant McCann has taken a voluntary break from international football to concentrate on his coaching commitments at Posh.

Northern Ireland Michael O'Neill boss drafted in Michael O'Connor and Lee Hodson as cover for the Russia qualifier and they retain their places in the squad.

Palermo striker Lafferty, so long a first-choice pick for his country, may find it hard to dislodge either Martin Paterson, the goalscorer against Fabio Capello's Russia, or Jamie Ward after both men impressed in a new-look forward partnership.

Full-back Daniel Lafferty impressed against the Russians but the Burnley defender is suspended for the Portugal game at Windsor Park on 6 September before being available for the away clash against Luxembourg four days later.

Northern Ireland may not be in the frame for qualifying from Group F but they will go in to the Portugal encounter with confidence after O'Neill secured his first win in charge.

"It was an easy squad to pick after the win over Russia. I feel it is a strong squad and a youthful one," said O'Neill.

"Portugal know they have to win to maintain their challenge in the group, but we have a chance to build on our last result and take another big scalp.

"From my point of view it's good to have the players together again when confidence and belief should still be high and it's important we try to keep up the momentum.

"Chris Baird and David Healy are still very much in my plans when they find clubs and I hope their situations are resolved sooner rather than later."