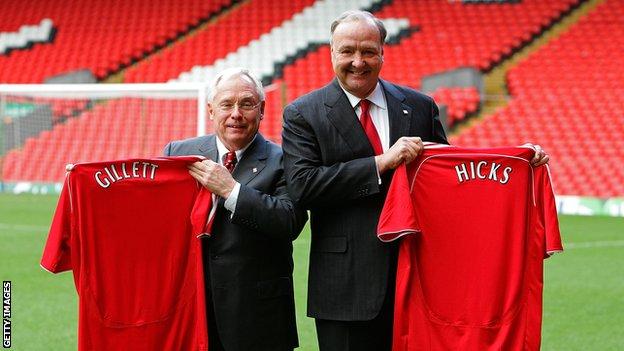 Liverpool are still recovering from the ill-fated reign of former owners George Gillett and Tom Hicks, according to ex-chief executive Rick Parry.

Their three-year spell at Anfield was dominated by financial problems caused by the loan they used to buy the club.

"That period of destabilisation is when we fell out of the Champions League," Parry told BBC Radio Merseyside.

"Once you're in there, you're achieving those regular revenue streams. It's a mountain to climb when it falls away."

2006-07: Shortly after George Gillett and Tom Hicks complete their takeover in February, Liverpool finish third in Premier League and are Champions League runners-up.

2010-11: Despite a last-ditch attempt from Gillett and Hicks to block a sale, Fenway Sports Group complete a £300m takeover in October. Hodgson is sacked in January and Kenny Dalglish returns as manager. Torres is sold to Chelsea for a British record fee of £50m, while Luis Suarez (£22.7m) and Andy Carroll (£35m) are signed as replacements. Finished sixth in Premier League.

2011-12: Around £50m is spent on Stewart Downing, Charlie Adam and Jordan Henderson. Finished eighth in Premier League and reached both Wembley finals, winning the League Cup and ending as FA Cup runners-up. Dalglish is sacked and replaced by Brendan Rodgers.

2012-13: Around £25m is spent in the summer and a further £20m in January, including £12m on Chelsea striker Daniel Sturridge. Finished seventh in Premier League.

The two US businessmen bought Liverpool in February 2007 for around £220m, shortly before the club reached the Champions League final for the second time in three years.

They saw off competition from another interested consortium, Dubai International Capital, with the Royal Bank of Scotland (RBS) providing them with a large loan facility which they used to help purchase the club.

They also revealed in nearby Stanley Park, although and Gillett claimed his relationship with Hicks had become "unworkable" a year into their partnership.

In the meantime, the debt against the club's holding company continued to grow as they struggled to repay the loan. The debt stood at £237m when Fenway Sports Group, led by John W Henry, completed its takeover in October 2010.

The change of ownership was pushed through, despite a last-ditch attempt from Gillett and Hicks to block the sale in court.

Parry said it was only until around nine months into the Gillett-Hicks reign that the scale of the financial problems became apparent.

"The debt was never on the club because [previous chairman] David Moores and I blocked that," added Parry, who spent 12 years at Anfield - including just over two seasons as chief executive while Gillett and Hicks were co-owners - before departing in 2009.

"It was in the holding company, but clearly they needed to get money from the club to pay the interest so that was going to be a burden.

"Our clear understanding was that it was short-term debt while they reorganised their own finances. It was in the offer document that there would be no debt on the club, or the club would not have to bear the costs, and certainly that changed. We weren't comfortable or happy with that.

"Their position was that the world had just hit the credit crunch and they didn't plan it that way, but those were the circumstances that we were all faced with and we were going to have to deal with it and move on."

The 2009-10 season was the last time that the Reds appeared in the Champions League, while they have failed to finish higher than sixth in the Premier League since ending as runners-up to Manchester United in 2008-09.

"That's maybe the best ever chance we've had to win the Premier League and that was a time where we should have been kicking on," said Parry. "With a few more adjustments to the squad, who knows what might have happened in the next year or two.

"You'd do a million things differently with hindsight, but that's not an option. We all wish passionately that they hadn't owned the club."