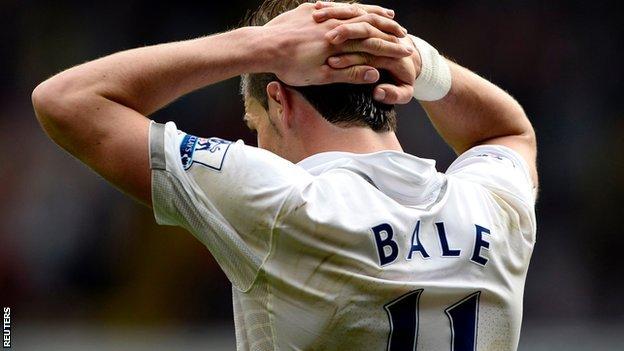 Tottenham are reluctant to sell Gareth Bale to Real Madrid until they have signed a replacement for the 24-year-old Wales forward.

The Spanish giants have made a world-record £86m bid for Bale but Spurs, who have been linked with Roma's Erik Lamela, say no deal has been agreed.

Spurs missed out on Brazil midfielder Willian, who joined Chelsea.

And they are happy to wait over Bale's sale as it may trigger a series of deals which end up boosting rivals.

Arsenal, for instance, have been linked with Real pair Karim Benzema and Angel Di Maria, and any potential deals for them may be affected by what happens with Bale.

The transfer window closes at 23:00 BST on 2 September.

Spurs have already missed out on former Anzhi Makhachkala attacker Willian, who joined Chelsea for £30m after he had already completed a medical at Tottenham.

Andre Villas-Boas's side have been linked with Argentine forward Lamela, 21, and Chelsea's Juan Mata, although Blues boss Jose Mourinho says the Spanish playmaker is not for sale, despite leaving him out of the side that drew 0-0 with Manchester United on Monday.

In addition to Real's offer for Bale, Tottenham have also received a separate bid for the Welshman. The identity of that club is not known but Manchester United have been linked with the player this summer.

Meanwhile, Bale failed to report for training on Tuesday following a club-authorised break in Marbella. No reason has been given for his no-show.

Real Madrid have made two different offers for Bale and are waiting to see whether Tottenham accept either one.

It is believed that a stage, nicknamed the "Bale Box", has been erected at their Bernabeu ground to unveil Bale to the Spanish club's fans.

Real Madrid's next home game will be on Sunday against Athletic Bilbao, the day before the end of the transfer window.