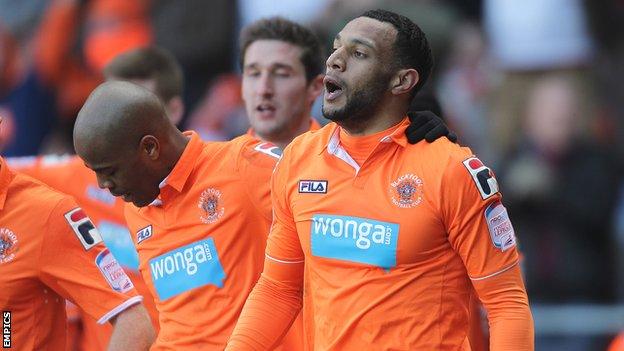 Manager Paul Ince has said he was disappointed to see Matt Phillips leave Blackpool but accepts the reasons why the winger was sold to QPR.

"To lose him is a big blow to me," Ince told BBC Radio Lancashire. "I'm not happy and I'm sure the fans aren't.

"But Matty had a year left and he wasn't prepared to sign a new contract. When an offer comes in for that type of money, business is business."

The ex-England captain added: "He's gone and I wish him all the best because he's been fantastic for us."

The Seasiders, who currently sit second in the Championship, on Scotland international Phillips's existing deal at Bloomfield Road in May.

A broken arm suffered in pre-season had prevented him for featuring for Blackpool in 2013-14 before his departure to Loftus Road.

Despite the disappointment of seeing one of their most effective players leave the club less than 24 hours earlier, Ince's side registered their third win in four league games with a

"The table doesn't take shape until 10 games into the season and I don't expect anyone to get carried away," continued the Blackpool boss.

"We are where we are and we keep defying the odds because we've got such a togetherness.

"It could have been 12 points after what happened at Middlesbrough [where Blackpool conceded a late equaliser] but that's most probably me getting a bit carried away myself."