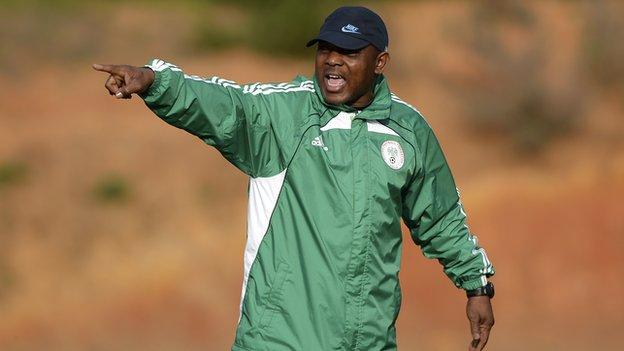 Fifa has confirmed to BBC Sport that it has received an official complaint from the Football Association of Malawi (FAM) over comments made by Nigeria coach Stephen Keshi.

However, football's world governing body added "please understand that we cannot comment any further at this stage".

FAM wants action taken over what it calls "racist" remarks by Keshi aimed at their Belgian coach Tom Sainfiet.

"We thought it was a personal attack on our coach and we had to defend him regardless of skin.

"We felt we should help our coach and at the same time put a stop to the racist remarks from Mr Keshi.

"We have sent evidence of what Mr Keshi said and we hope Fifa will come up with some measures to control Mr Keshi."

The case concerns comments Keshi made in reaction to Malawi's calls to have a crucial 2014 World Cup qualifier between the two nations moved from the city of Calabar on security grounds.

In the phone interview aired on UK-based African TV show , Keshi said: "I think the coach of Malawi is crazy.

Neither Keshi nor the Nigeria Football Federation have reacted to the complaint made by Saintfiet and FAM.

The World Cup qualifier in Calabar will decide who advances to the final round of play-offs in African qualifying for next year's tournament in Brazil.

African champions Nigeria need just a draw to progress while Malawi must win if they are to go through.