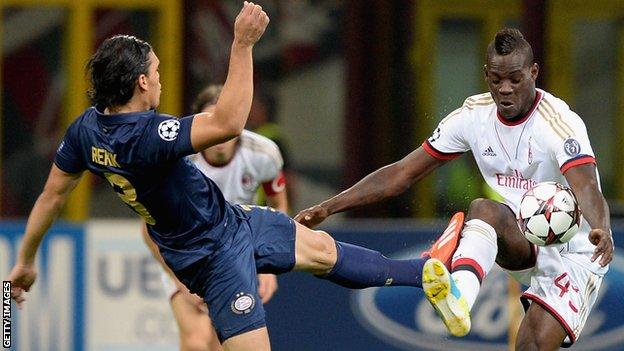 AC Milan secured a place in the Champions League group stage for the 11th time in 12 years with a 3-0 victory over PSV Eindhoven.

After a 1-1 draw in the first leg in the Netherlands, Kevin-Prince Boateng fired the Italians into an early lead.

Mario Balotelli doubled their lead before Boateng added a third late on.

Spanish side Real Sociedad reached the group stage for the first time in 10 years and are joined by Celtic, Zenit St Petersburg and Czech club Plzen.

They beat former semi-finalists Lyon 2-0 in the first leg in France and won by the same scoreline at the Anoeta Stadium.

Former Arsenal striker Carlos Vela scored both goals in the second half.

Kris Commons and Georgios Samaras grabbed the other goals as the Scottish side won 3-0 on the night.

Stanislav Tecl's fourth-minute strike was the only goal of the night as Plzen beat Maribor in Slovenia for a 4-1 win on aggregate.

Russian side Zenit secured their safe passage with a 4-2 win over Portuguese side Pacos Ferreira to seal an 8-3 aggregate victory.