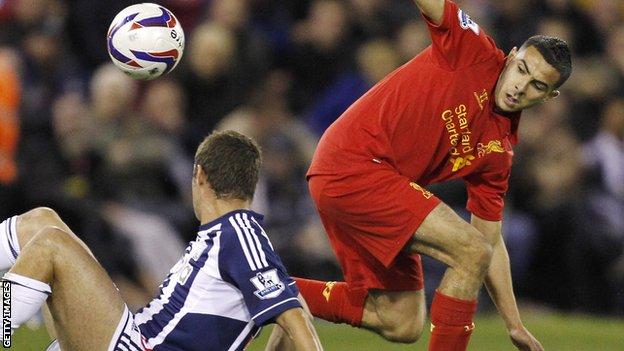 The 25-year-old winger has signed a deal at the Britannia Stadium after completing his medical on Tuesday.

He has made only four Premier League appearances since signing for Liverpool from Heerenveen in August 2012.

"He is an exciting player who has great pace and is very direct," Stoke City manager Mark Hughes said.

"He will certainly add another dimension to what we already have at the club."

Assaidi is Hughes's fourth signing of the summer after Erik Pieters from PSV Eindhoven,Marc Muniesa from Barcelona and Juan Agudelo, who will join the club from New England Revolution on 1 January 2014.

"Mark identified the need to add more pace to the team and Oussama certainly fits the bill in that regard," Stoke City chief executive Tony Scholes said.

"He is an exciting talent and will certainly strengthen the resources at Mark's disposal this season."

Assaidi could make his debut for the club in Wednesday night's Capital One Cup second-round tie with Walsall at the Britannia Stadium.