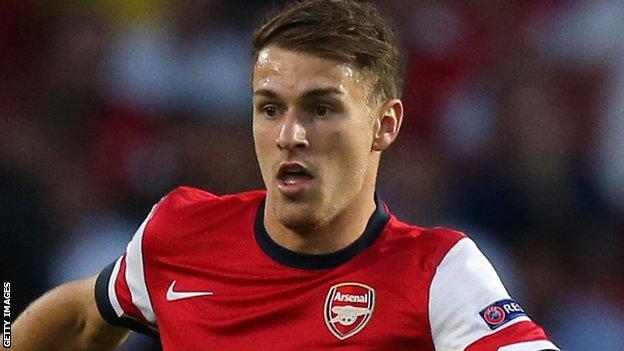 Midfielder Aaron Ramsey is a doubt for Wales' World Cup qualifiers against Macedonia and Serbia in September.

Ramsey scored twice as Arsenal confirmed their place in the Champions League group stages with a 5-0 aggregate win over Fenerbahce.

"I took him off with three or four minutes to go, but I don't know how bad it is. He wanted to stay on."

Ramsey is a doubt for Sunday's derby with Tottenham and the Gunners will be without Lukas Podolski, who faces three weeks out after suffering a hamstring injury against Fenerbahce.

The 22-year-old has been included in the Welsh squad but the absence of the in-form Ramsey would be a blow ahead of the forthcoming double header.

Wales travel to Macedonia for a qualifier on Friday, 6 September before hosting Serbia at Cardiff City Stadium the following Tuesday.

Chris Coleman's side are realistically unlikely to qualify from Group A as they are lying 13 points behind leaders Belgium and 10 adrift of second-placed Croatia.