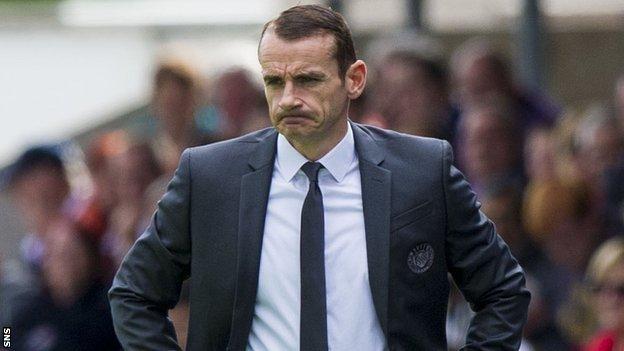 St Mirren boss Danny Lennon was "deeply hurting" after the 2-1 Scottish League Cup loss to Queen of the South but insists he is not under pressure.

Last season's League Cup winners have taken one point from nine in the Scottish Premiership and lost to Queens despite taking the lead in extra-time.

"There's one thing about Danny Lennon, he loves a fight," said the manager.

"I'm certainly not naive. I'm like every other manager out there knowing that it's a results-driven business."

Paul McGowan missed a penalty for the visitors at Palmerston before Steven Thompson's header broke the deadlock in the 95th-minute.

Over the course of my time being at St Mirren we have laid foundations, we have had improvements

However, Stephen McKenna and Michael Paton netted for Scottish Championship side Queens to secure their place in the quarter-finals.

"Straight and simple, we've let everyone associated with our football club down, none more so than the wonderful supporters that travelled," Lennon told BBC Scotland.

"There's a lot of work [to do]. They are good players, I certainly believe in them and they do have great character and you can see that in terms of the way they want to play.

"But we've also got to do the other side of the game when we don't have possession and knowing how to use every bit of experience that we have to try and see the game out.

"We didn't have to change anything, we had the game within our grasp, we were playing throughout the right areas where we thought that we could get at Queens and I've got to give Queens a lot of credit for capitalising on us dropping back off.

"This club, our football club, it's an absolute privilege and an honour to serve them.

"I still believe that over the course of my time being at St Mirren we have laid foundations, we have had improvements.

"We aren't getting the results that I certainly believe our performances deserve at this minute in time but it's something that we'll continue to work hard on."

"I've got to praise them because everyday they work their socks off," he said.

"They kept going and even when they got the goal against them, it didn't hamper them, they still kept at it and believing.

"Stephen McKenna scored an absolute cracker to get us back in the game and the winning goal was equally as good from Michael Paton.

"The response we got from going behind to Steven Thompson's goal was magnificent and they just had that never-say-die spirit about them."