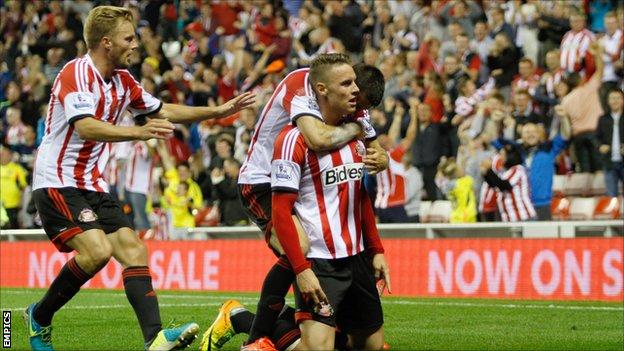 The Black Cats were 2-0 down with 12 minutes to go, before a four-goal burst ensured unlikely progress to round two.

Jozy Altidore and Adam Johnson scored either side of Connor Wickham's brace.

"If we don't focus attention on the first 75 minutes we will lose two or three games in this next period easily," Di Canio told BBC Newcastle.

"We're trying to develop a winning mentality but we were very poor for 75 minutes. We are going to work on it, I have to make sure that my players don't just celebrate this one win."

Victory hands the Italian his first success of the season after a defeat and a draw in the Premier League.

Meanwhile boos rang around the Stadium of Light at half-time with the Black Cats trailing 1-0 and when striker Ji Dong-Won was substituted midway through the second period.

South Korea international Ji has struggled to find form at Sunderland, with just two goals in 24 games during his time in the north-east.

He returned to the club after a fruitful spell of five goals in 17 matches at Bundesliga outfit Augsburg this summer but has failed to find the mark in three outings in 2013-14.

"He [Ji] never causes a problem at the club, in terms of professionalism, Di Canio is never going to play a player who behaves badly so I am the guarantee for the fans," Di Canio added.

"He's a good lad and a good talent, we need to use him. Today he did bad, otherwise I wouldn't have taken him off but I tell Ji he has to help himself.

"I know how to handle my players. Fans have to be sure that we do the right decision for this club, not just for one game but for the future.

"I can tell you I hope the fans understand because we would like to keep him, he's a free agent at the end of the season but until then he belongs to the club."