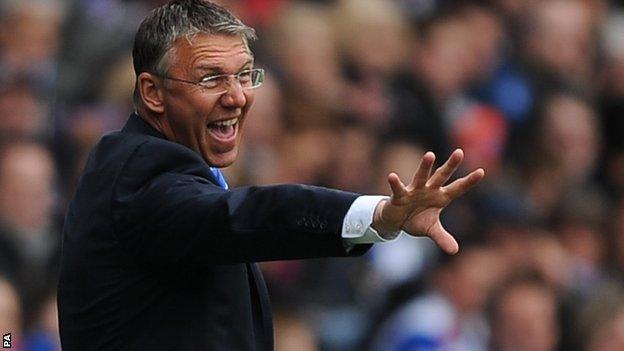 Reading manager Nigel Adkins has apologised to the club's fans after their 6-0 defeat by Peterborough in the Capital One Cup.

Adkins called the defeat "unacceptable" while also revealing his frustration with winger Jimmy Kebe, who withdrew from the squad on the eve of the match.

Kebe has been linked with a move away from the club and Adkins admitted he did not know where his future lay.

"It wasn't a nice evening for the supporters," Adkins told BBC Berkshire.

It was 3-0 by the interval, courtesy of Lee Tomlin's 25-yard shot and a fine individual effort from Danny Swanson.

Striker Tomlin completed his treble with two penalties, before Jack Payne's first goal for Posh, again from 25 yards, rounded off the scoring.

"Tonight we got a good hiding," added Adkins.

"We know that was not an acceptable result or performance, especially away from home, so my apologies to them.

"And yes, I have to take all the abuse because I am the manager of the team and have every right to do that.

"We've got a group of players who have got to get themselves together. We have a couple days left of the transfer window and I will be speaking to the owner and whether there is any movement on that I don't know."

Adkins had expected to include Kebe in his squad but despite the player being fit over the weekend, Reading's manager received a surprise call from the winger saying he could not play.

And Adkins revealed he did not know whether the 29-year-old, who has not played this season, would be at the club after the transfer window closes on Monday night.

"Jimmy was told on Friday he was playing," said Adkins.

"He trained well on Saturday morning, he left fully fit and the next thing I hear I get a call at 8.30pm on Monday night and he declares himself unfit.

"You read into that what you want. I was expecting him to play tonight. Who knows [what the future holds for him]? We will have to see what materialises.

"He has been linked with a couple of clubs in the papers. I've been here since March. He has not been available. As a manager what can you do about that?

"I'm disappointed he is not fit and available for selection."