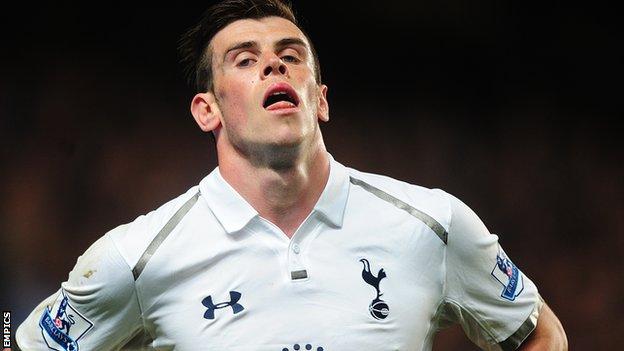 Tottenham may fine Real Madrid target Gareth Bale after he failed to show up to training for a second day, manager Andre Villas-Boas has said.

Spanish giants Real have made a world record £86m bid for the forward.

Bale, 24, was due back at training on Tuesday after a break in Marbella.

"He is involved in a big transfer to Real Madrid and, if it happens, we wish him all the best, but the fact that he hasn't turned up is not the correct behaviour," said Villas-Boas.

"I gave the player the weekend off. Monday was a day off for the squad. It is up to the club now to decide if it's a fineable offence. I've given my opinion on it, it's up to them to decide whether they act on it or not."

Under rules laid down by the Professional Footballers' Association, a player can only be fined two weeks' wages, which in Bale's case would amount to around £160,000.

Bale has not featured for Spurs or Wales this season due to a foot injury.

He has been left out Tottenham's squad for Thursday's Europa League second leg against Dinamo Tbilisi but has been called up by Wales for this month's World Cup qualifiers against Macedonia and Serbia.

Bale has been linked with Real all summer and Villas-Boas says the record-breaking transfer "could happen very, very soon".

The former Chelsea boss added: "It is a dream move for him but I think in the end this could have happened in a different way.

"At the moment, the two clubs are speaking. I suppose it could go to the last day or it could happen in next two days. But you wouldn't expect the biggest transfer in world football to happen easily."

Tottenham are reluctant to sell until they have signed a replacement.

They have been linked with Roma's £30m-rated Argentina forward Erik Lamela, but they missed out on Brazil midfielder Willian, who joined Premier League rivals Chelsea.

"I have told you that we will continue re-strengthening the squad, so we are looking at different positions to make us stronger," said Villas-Boas.

"In the next couple of days, we will have further news and I think we will see further additions at Tottenham."

Villas-Boas is also annoyed with England manager Roy Hodgson for not consulting him before selecting Andros Townsend for international duty.

Tottenham have spent £59m this summer.

In July, they broke their transfer record to sign Brazil midfielder Paulinho for a fee of just under £17m from Corinthians.

"I would like to give you a little bit more information but the fact (is) that I wasn't contacted in any way or form by Roy Hodgson regarding the player call-up," said Villas-Boas.

"I would have preferred to give my opinion on the fact that he gets called up so soon."

Hodgson handed call-ups to Steven Caulker and Tom Huddlestone for last year's friendly in Sweden, but they have not played since, while Jake Livermore has been discarded by England after just one cap.

Villas-Boas worries that Townsend may end up in a similar position.

"If there is continuity to the future of Andros in the national team, it's a great step for him," said Villas-Boas.

"If there is no continuity in the future, if his performances change in some way or if the player doesn't get involved in Tottenham and, in the end, he gets dried out, then it's a big surprise for me, because I think a player who gets called up for the national team after two games should have respect and continuity towards the future.

"So I assume from this moment that there will be that belief. I can recall, last season, we had Jake Livermore, Tom Huddlestone, Steven Caulker, called up for England.

"At the moment, it doesn't seem to have any continuity there."