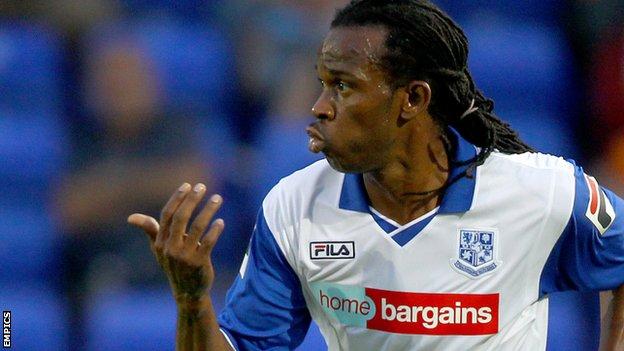 Tranmere manager Ronnie Moore says veteran defender Ian Goodison has given him a selection problem after a man-of-the-match display against Bolton.

At 40 years and nine months, the Jamaica international is the Football League's oldest outfield player.

Goodison played the full 120 minutes as

"He is a legend. He was the best player on the park," Rovers boss Moore told BBC Radio Merseyside.

He's got three bottles of champagne but he doesn't drink it, so I'm hoping he might give me one of them for a change

Tranmere have made a poor start to the league campaign, taking just one point from their first four games and conceding 13 goals in the process.

Moore is keen to add another centre-back to his squad but has said Goodison, who has made 392 appearances in more than nine years at Prenton Park, may be rewarded with an extended run in the team.

"He's shown me he can do it, as long as we don't have to push him out on a wheelchair on Saturday [at Oldham] and he can recover in time," joked the 60-year-old Tranmere manager.

"But it's given me food for thought. It's the best the back four has looked. They looked solid."

Goodison which will take him past a decade of service at the Merseyside club.

He was making his first start of 2013-14, having appeared as a substitute in